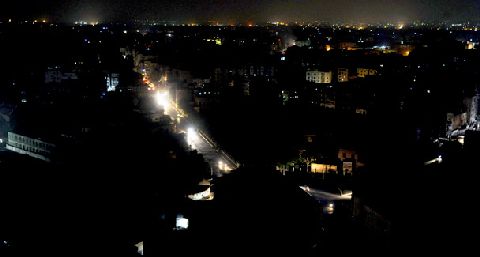 The city of lights became a city OFF Lights when all generating units of the KESC, IPPs and KANUPP collapsed, disabling the Pakistan’s biggest city with more than 16 million people, and the country’s commercial hub Karachi’s link with the national grid. The black-out began on Wednesday evening, and affected almost the entire city, all units of Bin Qasim thermal power station, Korangi thermal power plants, Korangi gas turbines, independent power producers and the Karachi Nuclear Power Plant stuttered to a halt.

The performance of KESC and government officials had a huge question mark on them. No body is there to accept the fault when power outage was from Karachi to Nawabshah as per my information and many other parts of interior Sindh. Part of province got light after midnight but Karachi had to wait a long 20 hours for restoration of electricity. In the month of June such massive outage is unbearable. God knows how long public has to suffer from such outages.

1 thought on “City OFF lights, Karachi”