It is not for the first time that integrity of IGSCE, O/A level exams in Pakistan has been questioned. In 2013, Pakistan Studies and Islamiat papers were allegedly leaked and candidates had to do a retake later. This led to an uproar among the students. This time, there are rumors that Maths and Biology papers are leaked.

According to CIE facebook page, they are still investigating the incidents.

Every year, two million people from 90 countries including Pakistan sit in Cambridge International Exams through the British Council. In Pakistan O/A level is considered as education for the privileged because of its high cost in comparison to the traditional matriculation system.

This year, IGSCE exams started on 5th May in Pakistan with Maths paper 1. There were reports of severe traffic jams and mismanagement at examination centers including lack of drinking water, proper furniture and parents not accommodated well at the venues like hotels and Karachi Expo center. Upon asking a student about facilities at the exam center, she replied:

I’m satisfied to the extent that the center is air conditioned. The thing that annoys me are the invigilators who often don’t respond when asked to. The desks are too wobbly and often split up. And it’s easy to cheat if you need to.

About the news of leaked paper she wasn’t sure but she admits that a friend of her friend got images of Maths question paper prior to the examination in Pakistan. The claim needs to be investigated because it is rejected by many as the images could have been taken after the exam is over.

Here are the images of apparently leaked Maths paper 1. 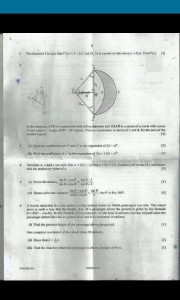 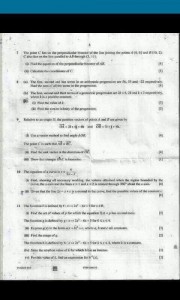 British council posted an update addressing the rumors on its website, which says:

The British Council takes the integrity of each and every examination which we deliver very seriously. Procedures are in place to ensure the integrity of examination questions papers and candidates’ answer scripts at each stage of the examinations process.
The British Council monitors social media and other sources to identify any potential cases of malpractice and there is no evidence that the integrity of the exam paper was compromised before the examination took place. The question paper that was purported to have been leaked appeared on social media AFTER the exam had taken place, not before.
If you have any contrary specific information or irrefutable evidence regarding the A level Maths paper, we ask you to contact info@BritishCouncil.org.pk

Similar post is at Cambridge International Examinations Facebook page which is being stormed with comments made by studenrd across Pakistan.

Here are some of the screenshots of comments. For the sake of privacy, the names and DPs are hidden. 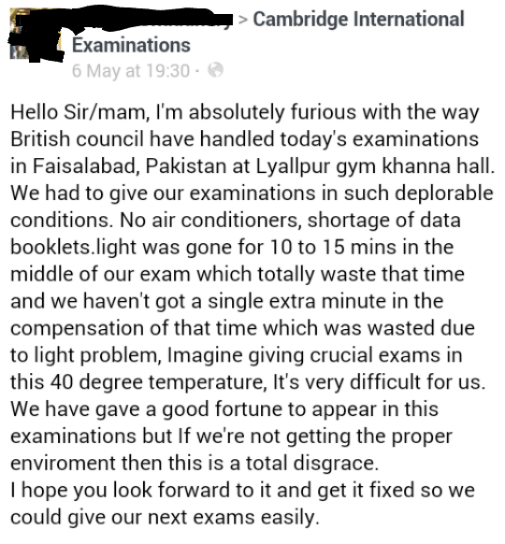 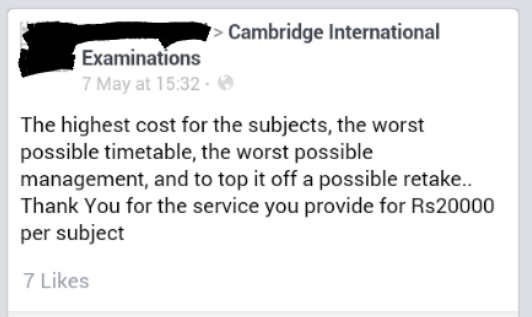 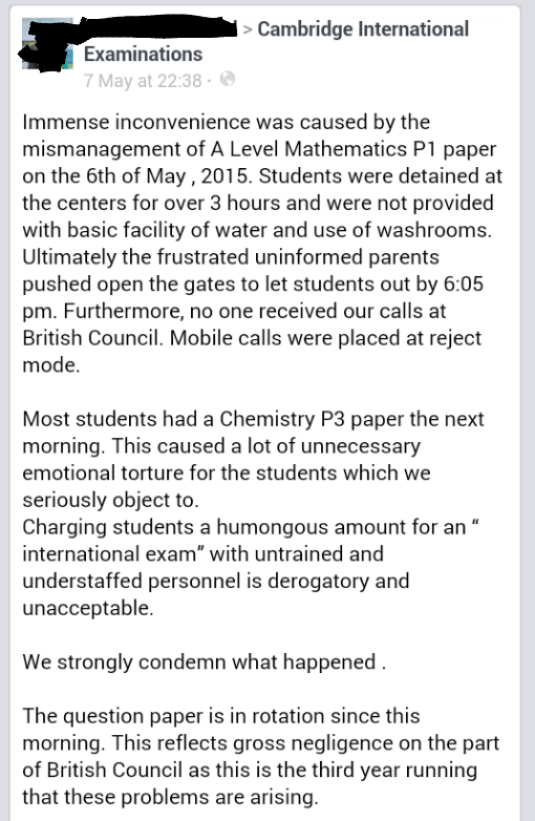 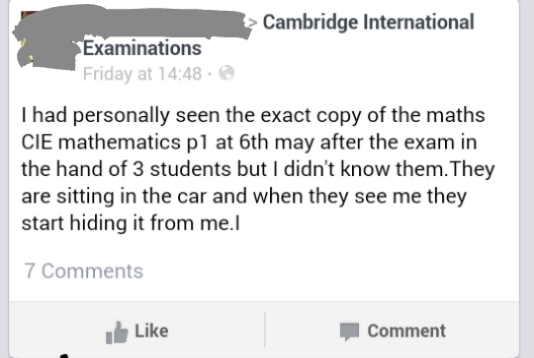 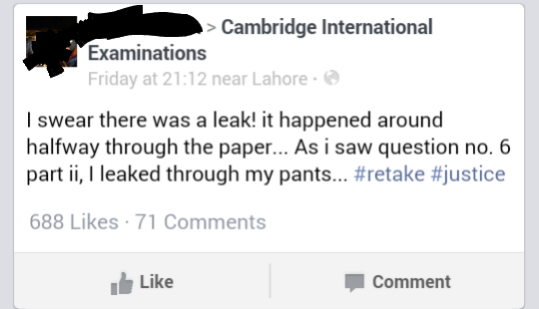 As of now there’s no announcement regarding a retake. Both British council and CIE needs to pay attention and address the grievances of students who are paying them a fortune to sit in exams.