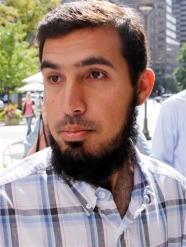 An Afghan immigrant and Denver airport shuttle driver Najibullah Zazi, 24, has been indicted on a criminal charge of conspiring with others, who are not named, to use one or more weapons of mass destruction, including bombs or other explosives to detonate somewhere in the United States. He allegedly had bought bomb-making supplies from beauty supply stores and was looking for “urgent” help in the past two weeks to make explosives according to BBC. Zazi was arrested late Saturday at his home in the Denver suburb of Aurora, along with his father.

A legal resident of the US since 1999, Mr Zazi is alleged to have received “detailed” explosives and weapons training at a camp in Pakistan last year. He is also accused of conducting “extensive” internet research on bomb-making and to have bought the components for building explosive devices. His arrest in Denver a week ago on charges that he lied to terrorism investigators sparked home and business searches in New York and Denver, as well as a flurry of national warnings of possible bomb attacks on transit, sports and entertainment complexes.

In public statements, Zazi has denied being part of any terrorist plot. But the FBI alleges in court documents that he admitted under questioning to receiving explosives and weapons training by Al Qaeda in the tribal areas of Pakistan that are considered to be the headquarters for the terror network headed by Osama bin Laden.

Authorities admit they are still trying to unravel, including the identities of some of Zazi’s suspected co-conspirators in New York, Colorado and elsewhere in the United States, Pakistan and possibly other locations.

Authorities also allege that they found handwritten bomb-making instructions on a hard drive on Zazi’s laptop computer that appear to match his handwriting, and that they found his fingerprints on the kind of small electronic scale and batteries often used in the making of homemade bombs.

While officials remain unsure of a specific target or scope or timing of a possible attack. And they confirmed that U.S. counter-terrorism officials have identified at least a dozen other individuals that they fear might be part of a plot to detonate homemade bombs on New York City commuter trains or other “soft” civilian targets.

1 thought on “Case of Beauty Parlor Bomb Plan: Homemade Bombing Conspiracy in US by Afghan Immigrant”