Whenever a fame-hungry individual is not successful in achieving his mission (the ultimate mission of richness) he/she resorts to blasphemy. That is the guaranteed knack for fame, according to their guide to prosperity.

We cannot deny that this usually works. At least there is a furor for sometime and the guy enjoys his fifteen minutes of fame with a toady smile plastered on his face. (Caption: I DID IT!)

Blasphemy is the green card for wannabes. It works wonders for this category. Overnight the person may get approval for their application. However, terms and conditions are applied regarding the longevity and strength of fame.

A person should be devoid of all talent but the talent of blasphemy. How many examples should I cite? Anyone heard of Irshad Manji? Maybe not. She tried her best with the book and campaigns and all…however, cruel luck didn’t turn her into her ideal, Salman Rushdie. Tsk tsk.

Manji is a lesbian ‘Muslim’, who is sure that Qur’an needs some drastic changes to accommodate her kind besides other matters. This is the usual brainwave that brainless people get- sacrilege. Sadly, she didn’t garner as much wealth from the sales of her book, ‘The Trouble with Islam’ as she expected. (Hey, maybe the title is jinxed…some astrologer should advise her not to use dark terms like ‘trouble’ in the title). Her daily hate mail number was also low that denied her the VIP blasphemer status – bodyguards included in the package.

In recent news Italian, unknown filmmaker Justin Sisely has emerged as the new blasphemy icon. In order to gain some quick bucks (poor chap is suffering from the economic downturn) he decided first to run a documentary projecting the two virgins, one male and one female, auctioning their virginity. That in itself is sickening to say the least, but that doesn’t end here. In a recruitment advertisement for his two ‘actors’ which featured the Virgin Mary with male genitalia drawn crudely on her forehead. The poster was later banned.

Sisely declared he received death threats from angry Christians but angry Christians is not a juicy enough story for the media. So Sisely became wise and understood the waves of the current trend and thought, how about if I spice it up with some death threats received from the established terrorists – Muslims? The ‘adventurous’ filmmaker revised the recruitment campaign. Now he is using illustrations of Muhammad (may Allah’s blessings be upon him) instead on the posters. 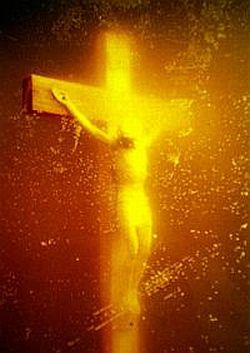 Strangely, such acts of blasphemy are always backed up by ‘freedom-of-this-and-that-fighters’. The American photographer, Andres Serrano, received laurels for his piece of art, Piss Christ.

The model of this ‘artistic freedom’ consists of a small crucifix submerged in the madcap’s urine.

Some years back, a Danish convert sister gave me a book, ‘The Clash of Fundamentalism’, written by Muhammad Tariq. She told me she was very shocked to know that such Islamophobes were present even in Pakistan. Her innocence about this matter was more of a surprise to me.

In the beginning of the book Tariq tries to give as many examples as possible to convince the reader that he was a fully-fledged atheist since childhood. Then he reveals his attraction towards the sexual aspect of life, that too, since childhood. Like Rushdie and co. he considers there are many contradictory statements in the Qur’an. His prime complaint is that an unmarried girl is told to guard her chastity but a married woman is told that she should also take the initiative in sexual intimacy with her husband. That is just unfair, according to him. Honestly, the book is quite boring and one dozes off several times while reading it. One wonders if a controversial topic cannot be written in an interesting way then what’s left?

The list of these lunatics will go on. But the problem here is that the strategies these hard times-affected people use is successful, at least, to some extent. Why is that so? Are we so vulnerable to their tactics? I am sure Muslims are the major contributors to the sales of their books. They buy the book, get emotional and then burn it publicly or privately. What is the point? Did we benefit from it in any way? We lose our money as well as temper with it.

The best way to avenge them would be to ignore their stupidity. Hence, they would be at a major loss and would be made to look like themselves, i.e. hopeless idiots.

9 thoughts on “Blasphemy: The Clichéd Exploitation of Religion for Fame”