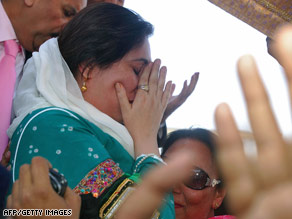 Benazir Bhutto’s welcoming procession left Karachi bruised and wounded. Karachities were barely able to get out of the shock of 12th May when 5 months later they are again dragged into mayhem and chaos. 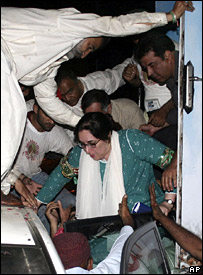 As perceived earlier while discussing return of Benazir Bhutto, Karachi was tense in apprehension something bad going to happen. Benazir had received threats of suicide attacks if she travel to Pakistan and the government also had reports of possible attempts on Benazir. However, Benazir decided to return and travel in an open truck with a procession that exceeded hundreds of thousands. Her foolhardiness caused deaths of more than 130 people leaving hundreds injured and marking a brutal scar on history of Pakistan. Was she unaware of the fact that it is literally impossible to cordon and secure a loosely connected convoy which passes through packed roads, under the bridges etc. While she ‘fortunately‘ went inside her bullet-proof cabin minutes before the explosions, it was the policemen on her security and PPP jiyalas who took the blasts on their bodies. May Allah have mercy on them (Amen). How long these poor people will continue to die for corrupt leaders? 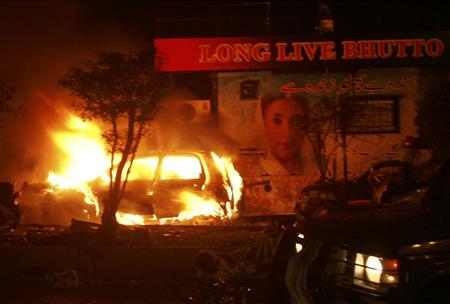 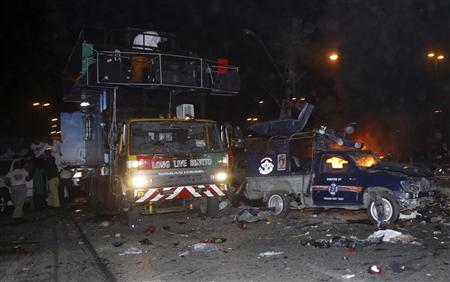 For now, the blasts have been labelled to “Taliban” elements. Media across the world has taken this incident as breaking news. BBC, CNN, Reuters etc are all giving it extensive coverage, blaming islamic-militants for this.

Benazir Bhutto has certainly got a political boost from this incident. The blasts in Karachi will help in covering her deal with government and will give her an edge over her political opponents. She is now posing a serious threat for PML-Q and its allies in the upcoming elections.

However, these blasts may be first of an ongoing series that might continue during the election campaigns.

Sindh Government has announced today as another day off for educational institutions. Most of the business and trade activities will also remain suspended. Pakistan Peoples’ Party has yet to make an announcement and if they decided to go on for mourning, it is going to be a long weekend for the people of Karachi, which started with the joy of Eid and ended with ghastliness and mourning.