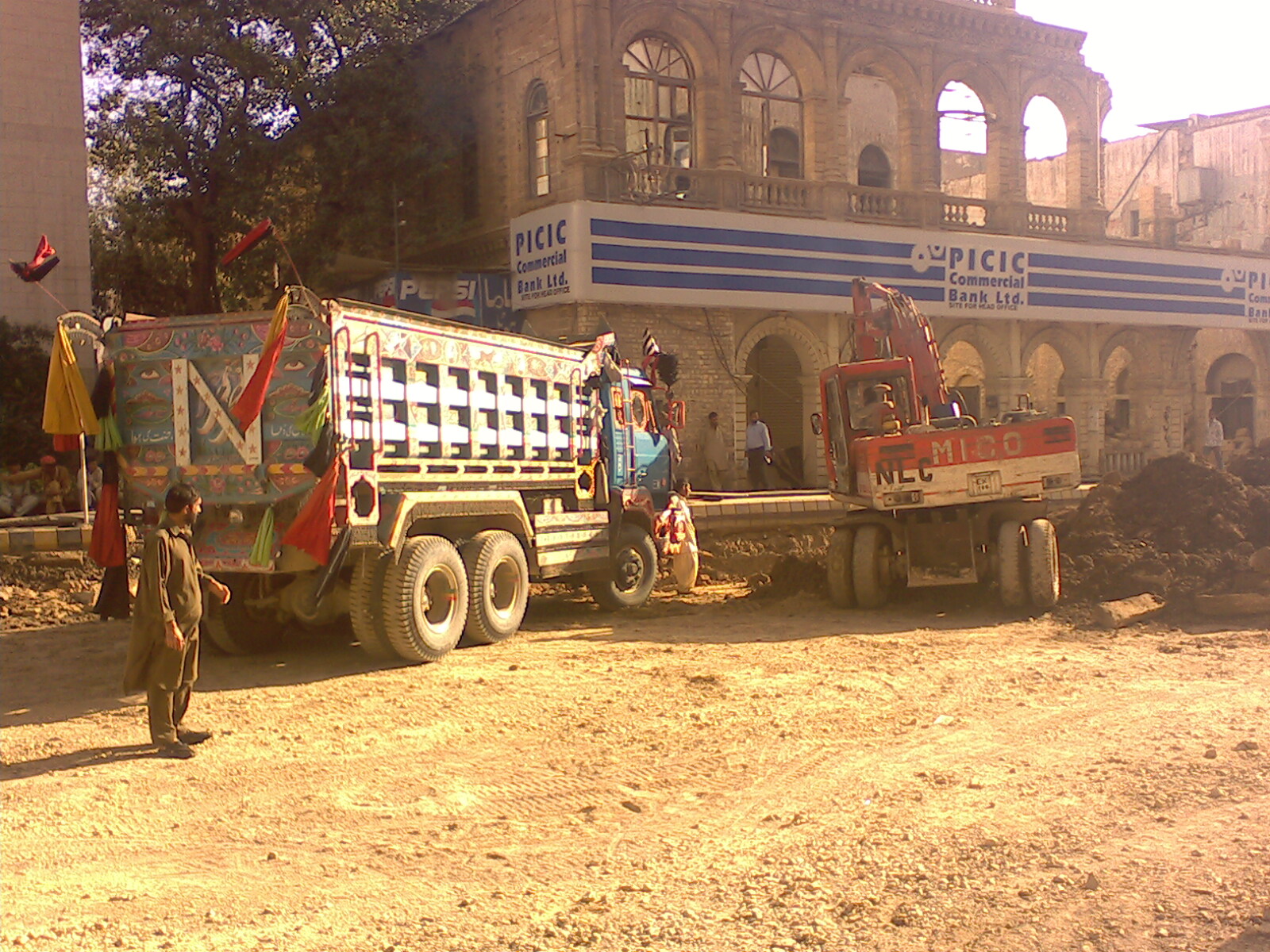 Banks like Habib Bank, MCB Bank, Citi Bank, Standard Chartered Bank and State Bank of Pakistan, Insurance companies like State Life, Adamjee and New Jubilee have their head offices on I. I. Chundrigar Road. Karachi Stock Exchange, Cotton Exchange, City Railway Station, Offices of Jang, The News, GEO TV, Army Welfare Trust are also on this road. Millions commute daily to I. I. Chundrigar road for one reason or the other.

‘Beautification’ of I. I. Chundrigar road started on March 25, 2007 after many months of delay. In the initial phase the road is ripped open and utilities and sewerage lines are being transferred to alternate locations. However traffic diversion, parking and other plans flopped as usual, as The News reports:

From the very first working day after the closure of I I Chundrigar Road to public transport, the passengers of this route suffered an hours-long traffic jam and several traffic gridlocks on the diverted route from Merewether Tower towards M. A Jinnah Road for multiple reasons. The traffic police personnel had a tough time in the field under scorching heat, and few said in the light of past experience the given diversion was not a wise decision.

A survey of the alternative routes revealed that the traffic from Keemari and West Wharf was diverted at Jinnah Bridge towards ICI bridge up to Baghdadi Chowk from where it used Ghulam Allana Road through the Kharadar Jamaat Khana up to Merewether Tower from where it was again diverted to M. A. Jinnah Road till Memon Masjid and from there it was diverted on Shahrea Liaquat towards Aram Bagh Chowk on Baba-e-Urdu Road from where it joined its old route.

Things didn’t work as planned by the traffic police and the city government who according to DIG traffic made this plan after coordination between them. The traffic was diverted from ICI Bridge at Baghdadi Chowk and from there on it was diverted towards Kharadar Jamaat Khana where the traffic remained jammed for more than half-an-hour due to a gridlock at the main Tower. On further movement it was noted that at Tower the traffic could not be allowed through immediately. The vehicles parked in double lanes on the road along railway warehouse occupied most of the road and what worsened the situation even further was the cars and motorcyclists who drove into the third lane on MA Jinnah Road that was supposed to be used by traffic coming towards Tower just at the beginning of M. A Jinnah Road.

The other factors that contributed in traffic blockades were the U-turns taken by cars and motorcyclists blocking the traffic from the opposite side and the parking along M. A Jinnah Road and Shahrea Liaquat. In addition to this, the non-mechanised commercial vehicles also halted the flow of traffic on the alternate route. The motorcyclists were complaining of open manholes and sewage accumulated at some points on the alternative roads. The pedestrians also suffered and mainly complained against non-stop pressure horns and the thick smoke-emitting from old, rickety buses.

So far PTCL is the only authority that has publicly announced about steps taken to safeguard its network.

Images of I. I. Chundrigar Road ‘Beautification’ (Click on image to enlarge)