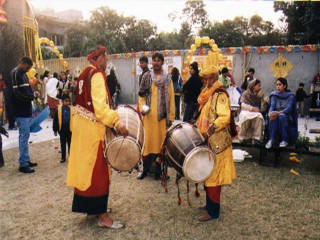 When nip of winters yield to moderate and pleasant spring season and when trees start wearing new leaves, festive frame prevails all around, Lahories mark the advent of the season with Basant Bash — kite-flying festival now famous as one of the annual tradition of the historic city, some controversies notwithstanding.

From mid-January to mid-February the clear blue skies over Punjab and Lahore in Pakistan, come alive with the gaiety and colour of paper kites – in all hues, shapes and sizes. The yellow of mustard flowers and the Amaltas trees is the first colour to be sighted after the severe winters of the north. Poets have penned romantic verses, and artists, both of the past and contemporary, have painted the Basant skies.

Over the years it has become an event where above and beyond resident of Lahore, their friends and families from across the country and fun loving people form all over the world assemble in Lahore to be part of this unique occasion. Every one is dressed in colourful attires. Multicolour and decorated kites are flown in the backdrop of traditional music.

Here is how we celebrated Basant last year: The event started up with kites, and rounded off with music, fun, colour galore and a whole lot in between. The Main Campus of the Lahore School that is known for its beautiful gardens, exquisite environment was specially decorated for the occasion. The whole premises gave a look of a big flower basket. In addition, brightly dressed flocks of folk entertainers performing for no particular audience added new touch to the landscape. In some other corners, music played.

Walking along the walkways — from spanking new parking spot to the café — shining in pristine glory gave an idea of aesthetic sense of all those who belong to the Lahore School. Even the bushes and decorative trees were singled out with special kits, giving walkways a dazzling look.

Good food customarily goes with Basant festival. Sizzling and spicy foods — a mixture of culinary delights by the best food vendors in the city was served to every one.

It was in this milieu that students, faculty and their families flew colourful kites. Calm air and a sunny day were most suitable for kite flying. One could see every one looking up and simultaneously shouting while the kites oscillated in the sky. Even those who were not flying kites were part of the rhythm — unfazed by cheerful crowd and the bustle.

White paper kites shimmer in the night sky, diving and soaring as rival fliers joust in duels marked by battle cries of Pecha! and victory shouts of bo kata! Bursts of drums and trumpets mark the cutting of a kite’s cord. Men drape themselves in embroidered shalwar kameeze with matching ankle-length scarves, little boys strut in three piece suits, and women coat their hands with henna and stack their arms with bangles.

But even such a joyous festival has a dark side, as hospitals invariably are packed with kite flyers who fell off roofs and children who were hit by cars as they ran down the streets, their faces turned towards the sky to watch the kites. Quarters of the city are plunged into darkness when razor-sharp kite cords rolled in powdered glass or made of steel cut electricity wires. “If there are 50 one-hour breakdowns, it costs us 2.5 million rupees (43,00 dollars).”