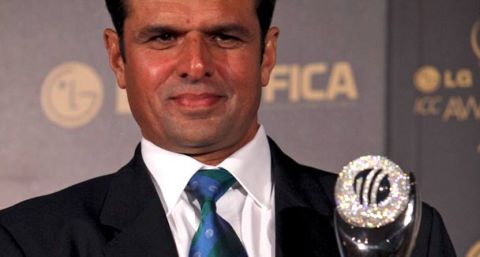 Adding another feather to his cap and once again defeating the best of the lot Pakistani Umpire Aleem Dar grabs the David Shepherd Trophy for ICC Umpire of the Year 2011. He has now won three consecutive ICC Umpire of the Year awards. Simon Taufel won it five times in a row and is the only other umpire to have received the award since its inception.

The ICC awards for the outstanding performers in world cricket during last year (between 11 August 2010 and 3 August 2011) held on September 12 at the Grosvenor House Hotel, Park Lane in London. Three Pakistanis were short listed for the biggest award of Cricket. Left-arm pacer Wahab Riaz and Right-hand batsman Azhar Ali have been nominated in the category of the Emerging Player of the Year while Aleem Dar has been nominated for the prestigious category of best umpire of the year.

Aleem Dar proved his precision yet again during 2011 Cricket World Cup when all the 15 UDRS (Umpire Decision Review System) appeals against him were struck down. Even the modern technology cannot beat his vision. He accepted his award from ICC Hall of Fame 2011 inductee Alan Davidson.

“It’s a great honor and I’m thankful to everyone at the ICC and also my colleagues on the Emirates Elite Panel of ICC Umpires along with the Pakistan Cricket Board,” Dar said. “I’d like to also thank all my family for all their support since I’m away nearly eight months of the year umpiring.”

Thanks Aleem Dar for making us proud yet again in an era of cricketing turmoil in Pakistan. Wishing you health and happiness, hope that you will bring many more accolades in the future.