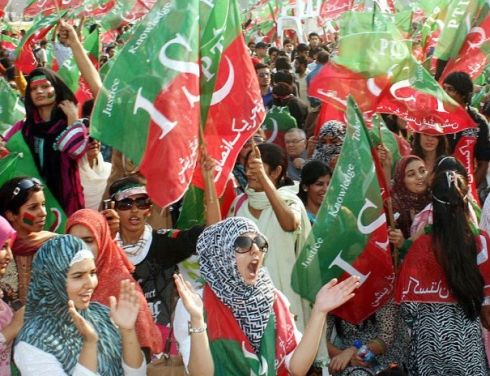 Fifteen years of slow but steady struggle which sometimes looked like a one-man show and labelled as just a fan club by critics has surely turned the tables in one big show of strength. “The Lahore Jalsa” has shaken repeatedly tested corrupt giants. There is a fear in their ways, and you can sense it.

Pakistan is a country where:

– 60% of the people enjoy the day of election as a ‘day off-work’ at home and opt not to vote,
– one-third of the voters list constitutes fake and non-existent names,
– and where majority of the voters decide overnight to cast their votes due to pressure, fear or incentives like a day’s ration, sewing machines, or ‘Ghee ke dabbay’.

True, along with the corrupt ruling elite, the silent majority is equally to be blamed for the mess. The majority who either do not know the power of their vote or couldn’t think of a reason to come out of their comfort zones to vote. They dwell in air-conditioned room, cars and offices, hardly knowing the problems of a common man, so why bother?

I feel lucky to have witnessed a day when people, especially youth, from all social backgrounds, some wearing Shalwar Kameez and headscarves and others in jeans and designer sunglasses, some travelling by public transport and others in their valuable and comfy cars, some speaking the Lahori style Punjabi and others insisting on their ‘dude’ style English, all came out to gather in the heart of Punjab under Jinnah and Iqbal’s posters, Pakistani flags, National Anthem and songs on the 30th of October on Imran Khan’s call to be part of ‘Tsunami of change’.

After carefully watching the big day in the history of Pakistan Tehreek e Insaf and the utter failure of media to ‘change the topic’ or turn a blind eye to the mammoth crowd, one wonders as to what has let the sleeping silent majority out. Fifteen years is not a long time, keeping in mind the fact that a sport hero turned politician, with no roots in established political houses of the country, and with no experience of fraudulent short cuts, talks about dreams which this nation had probably dumped into cold storage for years.

The critics may, very rightly, say that this big crowd doesn’t mean anything electorally and wouldn’t constitute a single seat constituency but it cannot be ignored or taken lightly that people from all walks of life, from labourers, hawkers, rickshaw drivers to educated youth from all colleges and universities including the most ‘westernised’ reached the uneven ground of Minar-e-Pakistan which most of the elite youth might not have been to in years.

What was the motivation? What was the call for? The question is extremely significant. The ruling class has always talked about problems of common man but all we have seen is years of hopelessness, heaps of broken promises and blatant lies. No one has delivered. Standard of living changes after elections but only for those who reach the Parliament houses and ever expanding offices, ministries and ranks created every day. It has never trickled down to the commoners.

The call to gather was for ‘change’. Imran Khan talks of the common man and he has delivered, although on a smaller scale (Shaukat Khanum and Mianwali University Projects). He talks of the ‘Rule of Law’. Having explored the Western culture and comparatively studying Islam, he takes pride in owning Islamic values and systems. He promises not to bow for anyone’s interest and keep the interest of Pakistan supreme. He opposes Pakistan’s alliance with US War on terror and condemns the innocent casualties as a result of US drone strikes in Pakistan.

‘Friends with all, slaves of none’ was his message boldly sent out from the stage surrounded by thousands of chanting and adrenaline pumped Pakistanis. And most important of all, he takes inspiration from the Qur’anic principles of social justice and equality, Iqbal’s philosophy of ‘Khudi’ (self-respect) and Jinnah’s concepts of Islamic democracy. He strongly believes in Pakistan being an ideological state based on Two Nation Theory , a concept disputed by westernised ‘liberals’ in the country who are bent upon labelling him as ‘Taliban Khan’. Call it a wishful thinking, but if the right-wing hardliners do not see him ‘up to the mark’ and the secularists see him as a ‘Mullah’, the nation would look up to him as a moderate leader capable of establishing a modern Islamic state.

“Gone were the insidious humiliations of colonialism and the fear of being drowned in an overwhelming Hindu majority in an independent India. We were free people, free to rediscover an Islamic culture that had once towered over the subcontinent. Free, too, to implement the ideals of Islam based on equality, and social and economic justice. A democracy, as Pakistan’s founding father Muhammad Ali Jinnah said, not a theocracy. We were to be the shining example in the Muslim world of what Islam could achieve were it allowed to flourish. Such dreams we had…”

“ …Iqbal not only conceived of a self-governing Muslim state, his passionate voice awakened and activated Indian Muslims motivating them not only to strive to free themselves from the bondage of imperialism and colonialism, but also to challenge other forms of totalitarian control. Believing fervently in human equality and the right of human beings to dignity, justice and freedom, Iqbal empowered the disempowered to stand up and be counted.”

This rally is not less than a wave of big change and a practical demonstration of the Gallup survey and also the WorldPublicOpinion survey in collaboration with, U.S. Institute of Peace with statistics inferring:

‘..strong public support for a wider role for Islam. Asked to gauge the importance of living “in a country that is governed according to Islamic principles” on a 10-point scale, 61 percent give an answer of 10 (meaning “absolutely important”). The mean response is 9.0’

So, Pakistanis want rule of law, and self-respect and a society based on Islamic principles, exactly the things promised by Imran Khan. That is why they came out in numbers to show their unconditional support. A ‘clean sweep’ in coming elections still looks unrealistic for Pakistan Tehreek e Insaf. However, by joining hands with honest forces, without compromising his principles, Imran Khan is capable enough to change Pakistan for better.

Aisha Aijaz is a medical doctor, specialising in Acute Medicine. She writes about Pakistan politics & current affairs and likes to read Urdu poetry.

2 thoughts on “PTI Jalsa in Lahore: Is the Silent Majority Awake Now?”