Amongst huge governmental claims of relief and support activities for the IDPs of Swat, reality on the ground is quite different. However, the advancements in media and citizen journalism has made it difficult for the Ministers and their gangs to cover up their blunders and drawing-room statements.

On one hand the displaced people of Swat, Buner, Dir and adjacent areas are trying to cope up with harsh living conditions out of their comfort zones, on the other they are being exploited and manipulated by opportunists. One such incident occurred right in the capital, Islamabad.

More than 20 families from Swat and other areas were brought to the capital (rather than to usual camp locations in Mardan, Charsadda, Peshawar etc) and were camped at sector G-7 of Islamabad. 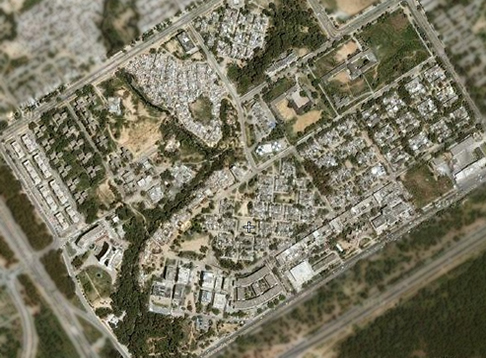 Couple of days back, Makhdoom Javed Hashmi of PML-N told Iftikhar Ahmed of GEO during the live GEO Pukar transmission that the IDP camp in Islamabad is established on a sewerage line and he is intending to go there and stay with the refugees for few days to show the world how badly they are being treated. While he was cut short by Iftikhar Ahmed, I got curious about this and shared it on Twitter [tweet here].

Today, David Mac Dougall tweeted about a refugee camp closed down & moved on by Pakistani government. On my inquiry he confirmed that it was the same camp which was mentioned on Geo News by Javed Hashmi and indeed the IDPs were in pretty unhygienic conditions there. He also referred me to a report by Nosheen Abbas of DAWN, filed in Saturday’s (May 16) edition. She visited the camp and wrote down her observations, as follows:

The camp has been set up on a plot that was formerly a dumping site. In fact, these IDPs are living on top of a dumpster with a gutter running over the camp. There must have been about 40 tents, each has a set of horrific story of pain and loss — the kind of loss that some would find unimaginable.

They live in a wretchedly unhygienic area. No access to clean drinking water, they wear soiled, not old clothes. There’s dust in the air and the heat is unrelenting. Used to the clear and cool air of Swat, they not only are having to adapt to the new weather, but a host of illnesses borne out of their filthy surrounding areas. Bugs of all types including flies are roaming in a filth-infested area right in the midst of the camp. Within ten minutes of meeting them I already have two huge mosquito bites. ‘You cannot imagine how many mosquitoes are in the tent at night,’ she tells me with eyes wide open, as I scratch my own arm. ‘The children are developing strange skin problems. It’s because of this gutter that’s running along the camp,’ tells an NGO volunteer. The camp has already seen a delivery, an asthmatic patient, a man who suffered of heart attack, a child who has recently been diagnosed with blood cancer and a woman who suffered post-natal bleeding after she gave birth to her child in the camp without a doctor.

President Asif Ali Zardari’s sister MNA Faryal Talpur has donated these tents to the IDPs, but they are substandard and hardly worth living in. It’s too difficult to justify why our own states fat cats can’t provide decent living areas for victims of this man-made disaster — a catastrophe the outcome and consequences of which were predicted at least a year before the threat reached our doorsteps.

Now, who brought these IDPs to Islamabad, and why? Saadia Khalid of The News had an article on May 13, saying:

The internally displaced persons (IDPs) from Malakand Division alleged that some political workers giving them ‘false hope’ of better facilities brought them to federal capital for “actually exploiting the aid” being provided for them.

Talking to ‘The News’ a number of IDPs from Malakand Division said that after migrating to Islamabad they have not been provided the facilities they were promised by some political workers.

It has been learnt by ‘The News’ that few political workers are convincing the affectees to set up their camps in capital city rather than setting them up at their adjoining areas including Mardan, Swabi, Charsada and Peshawar.

Talking to ‘The News’ the refugees claimed, “Some people donated some goods, but we haven’t got anything, as it had been grabbed by the political workers.”

The refugees apparently had been fascinated by the donations or aid they expected to receive during their stay in the capital city. “Some people told us that we would receive free food, medicines and shelter in Islamabad, which would not be provided to us in refugee camps at other part of the country,” said a refugee.

On the other hand People’s Youth Organisation (Malakand Division) [An offshoot of PPP?] Divisional President Khurshid Adil told ‘The News’ that the affectees were having security concerns in the refugee camps in other cities so they were brought here. “The security conditions in adjoining areas including Mardan and Peshawar were not satisfactory so we brought them here for the security of their lives,” he claimed. He said that they have not received a single penny, as donation from the government, however, a few traders organisations and philanthropists have donated them some money, which had been spent on the refugees. “We are doing this for God’s sake and have no vested interests,” he said.

Interestingly, a Daily Times report of May 14, disclosed that the authorities are taking different measures to discourage entry of Internally Displaced Persons (IDPs) to the federal capital fearing that they would adopt permanent residence here like earthquake victims. The official said so far over 300 families are residing in different areas of the city including Saray Kharboza, Golra and Sector G-7/1 katchi abadi.

Ultimately, on May 16 this particular camp was uprooted and the IDPs were moved to some unknown location, as tweeted by David Mac Dougall.

It remains a mystery why the IDPs were camped in Islamabad, and that too on a sewerage site. It is clearly another mismanagement by the government where it was unable to monitor IDP movement, which allowed corrupt elements of society to take advantage of them.

Following images depict the environment IDPs have to live in. Certainly unhygienic. 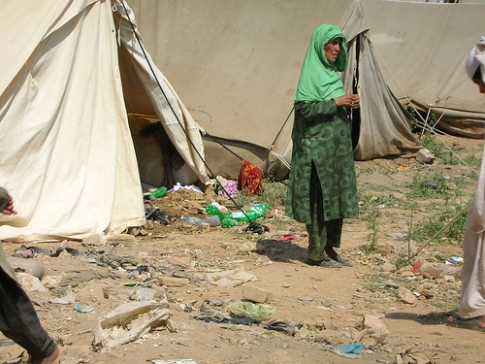 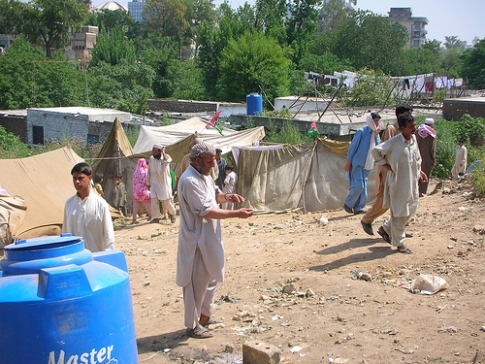 [Update] DAWN confirms that families of IDPs are forcibly evacuated from sector G-7 to Gori Rajgan, in outskirts of Islamabad.