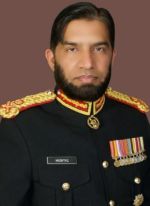 10 people have died and many are wounded in the suicidal attack in Rawalpindi this afternoon. Nation was taking sighs of relief after the elections and were hoping for the change, and then this scourge happened.

Surgeon General of Pakistan, Major General Mushtaq Baig also killed in the blast with his driver and guard. The human loss is very tragic no doubt about it, but the blow it has inflicted upon the happiness of nation is more sad and very much gloomy.

Pakistanis have voted against this evil of terrorism just a week ago. Pakistanis have given their word against the forces of darkness and terrorism. Terrorists want to destabilize Pakistan and they want to strike at the core of Pakistan.

It’s high time that the winning parties don’t waste anymore time in power sharing and power transfer and power making, and they should join hands and start working for the lasting resolution of this scourge of terrorism on war footings.