Since creation of Pakistan, its army is fortunate enough that large numbers of volunteers are always available for their official ventures. Either its first war in Kashmir or last defeat of Russia, it always kept around different groups which served their purposes. Most warriors belong to FATA, NWFP or Punjab areas that were utilized as proxy warriors. Each Pakistani government helped Pak army to keep running their agenda till 911 happened.

After 911 when Musharraf u-turned from old policies of army and neo-imperialists dictated policy was started to be implemented, it was great blow to senior officials of army, because except war against Russia in Afghanistan all such warriors devotedly and voluntarily served Pakistan without any financial or political benefit, and during Afghan war those were supplied with weapons to fight alone, there we have seen no visible sign of large scale defense housing type projects which may indicate their luxurious life style, still peoples of the area are living in poverty and traditional homes. Thousand of peoples sacrificed their lives being fooled by Pakistan army who taught them lessons of Jihad. On other hand army generals had been collecting land and housings and passing luxurious life style and never mentioned free services of those illiterate and emotional peoples. Now a few matters are very clear as a continuity of Mush policy and further in progress by PPP that:

1. Forget Kashmir for ever
2. Be ready to fold nuclear capabilities of the Pakistan
3. Learn to live on foreign aid
4. Sell Pakistan‚Äôs remaining assets to foreign companies
5. Forget rule of Law and supremacy of judiciary
6. Pakistan Army to work as Police force or constabulary.
7. Be ready to listen squeezing further Pakistan

Citizens are pushed to wall:

PPP‚Äôs new doctrine of ‚Äúour own war‚Äù is a methodology to divert attention of people from their primary stand of Roti, Kapra and Makan. It is old technique of PPP leadership that no sooner those get power those started corruption, second thing those gave a slogan to illiterate Jials to sit on every corner of cities and towns and keep singing given phrases such as ‚ÄúBangla Desh Manzoor‚Äù, ‚Äú58 2 b‚Äù is worst law in the country, America is ‚ÄúTaghooti Taqat‚Äù, ‚ÄúSamraj‚Äù and now ‚Äúour own war‚Äù etc. Question is that all the government machinery is propagating that Pushtoon‚Äôs and Baloch‚Äôs are anti-state terrorists, and those are receiving funding from India, Afghanistan, NATO or any other country, it is a white lie, however suppose if those will join foreign forces to save their lives, then what will happen. Either our army has the capability to stop them, today a Maj. Gen who is conducting genocide of Pushtoon‚Äôs claimed that total strength of Taliban is 1000 ‚Äì 2000, 1000 have already been killed, out of them only 3 are shown as foreigners, which comes to only 0.3 % number of foreigners, question again arises that why Pushtoon‚Äôs are scarifying their lives while those have no materialistic benefit like Pak army generals and officers are gaining from war of terror, neither those are able to make bank balance, buy lands or admit their children in overseas education institutions. Think if those will join anti-Pakistan forces then whether existence of Pakistan would remain intact. Everybody who has power may think patiently in the interest of Pakistan that genocide is not correct answer. 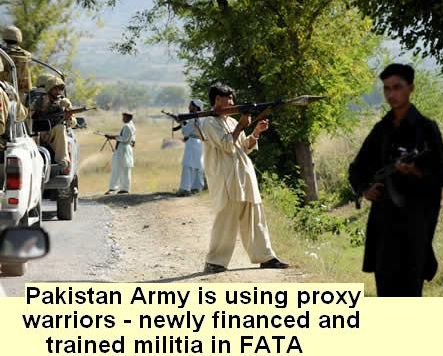 Now since last month Pak Army has adopted same strategy which US adopted in Korea and Vietnam, provide arms and divide local peoples, locals are pushed to burn homes and kill their brethren Pushtoon‚Äôs. It is another mistake which army is doing after creating war lords in Afghan war, look with another angle in opinion of liberal fascists and PPP that entire population of that area is Deobandi, Ahle Hadis or Wahabi, and Wahabi doctrine is biggest danger for neo-Imperialism, it means one group of Wahabi‚Äôs is removed from the list but bigger Wahabi group is emerging with sophisticated weapons.

It mean army is again using proxy warriors for their safety, Pakistan army and PPP along with ANP are not silly that those did not understand tribal culture, blood is blood, an unending war is being ignited. It will suit to state till victims will keep dyeing on the name of Pakistan, (their sons, daughters, mothers and children‚Äôs are dying in barbaric actions), so humans have limit to tolerate and there is a limit of patriotism.

See reports of only September 27, 2008 how army is creating new war lords. (Please search reports of previous days on internet)

– 600-strong lashkar assisting police in rural Peshawar
– Kalla Khel lashker to impose Rs 5 million fine, demolish houses of Taliban backers. The Kalla Khel tribes in the Khyber Agency formed a 300-strong lashkar against the Taliban in the Bara area.
– A Zakha Khel tribe jirga announced to form a lashkar against the Taliban after Eid separately.
– The political administration warned the tribesmen it would block the Ziarai Road if they fail to stop the militant group Lashkar-e-Islam from using the road
– BARA: Another tribe in Khyber Agency Friday raised lashkar (armed volunteer squad) to purge the area of miscreants. Elders of the Kalakhel decided to raise an armed lashkar to assist security forces in maintaining law and order in the area, also decided to demolish the houses of those found sheltering the militants. The jirga also decided to impose a fine of five millions on those violating the agreement.
It is decided that the volunteers would patrol the area alongside security forces. They also decided that the personnel of the armed lashkar would also be deployed at the security check posts. (1)
– Shafeerullah Khan, political agent, Bajaur Agency, briefed the media about the role of tribal Lashkars of Salarzai and Utmankhel tribesmen against the militants. The elders of Salarzai and Utmankhel tribes also informed the media about the activities of their respective armed Lashkars against the militants. (2)
– Gen Tariq claimed that over 1,000 militants had been killed in the operation so far, in which five were important foreign and local militant commanders. The foreigners killed in the operation belonged to various countries, including Egypt, Afghanistan, Uzbekistan and other Arab states, he added. (2)
– A tribal Lashkar comprising more than 3,000 armed volunteers on Thursday set all the three main Taliban hideouts on fire after chasing the militants associated with the banned Tehrik-e-Taliban Pakistan (TTP) out of their area in Jamrud Tehsil of the Khyber Agency. The elders leading their sub-tribes were Malak Imdad, Malak Fazle Mullah, Haji Bacha Gul, Rozi Gul and Haji Aziz. (3)

So this is story of ‚Äúour on war‚Äù and ‚Äúproxy warriors‚Äù of PPP and Pak army. When Pak army was going to involve in civil war all leading scholars requested them not to do so, now those are using tanks, helicopters and jets on unarmed civilians, if Pak army claims that strength of TTP is only 1000 then it a matter of laugh that three division army is fighting with them, it looks that after 1965 by passing 30 years army has forget meanings of war, so it is their equivalent to second world war. Proxy warriors who are protecting them are a sign of private army operating at Iraq or Afghanistan under protection of war lords.

We will wait for new war lords when those will be declared Wahabi and Lashkar e Jhangvi or Saudi financed. It will not take so long to wait. PPP is nothing except a bunch of beneficiaries who were waiting since long to fill their stomach, however their leaders separately saved looted money, but it is duty of Pak army to think patiently whether current genocide of Pushtoon‚Äôs and Baloch‚Äôs is justifiable.