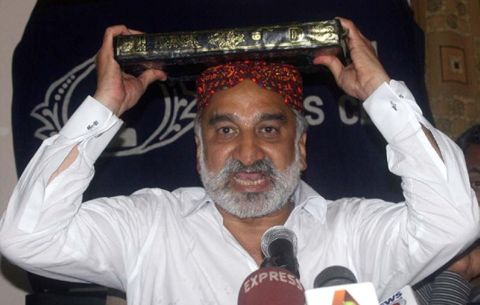 Believe it or not, Zulfiqar Mirza is the star of today, let it be our media or the masses on the street. The former Interior Minister (Sindh) as well as one of the most closest aides of the President is no new to controversies as well as moving out of ordinary. But undoubtedly his latest revelation have placed him in one of the most testing times of his career as well as his life.

Mirza was in grey for quite sometime, especially after being forced into a “leave” by his party for bringing its reconciliation drive in Sindh and center to the verge of collapse. Exit from the portfolio of security czar of Sindh was too much for him to take, as it seemed that Mirza had taken enough of this “appeasement in the disguise of reconcilliation” from his party. As the man for maintaining security in the province as well as the troubled city, Mirza brought down the God-Fathers of Karachi feared underworld to their knees, although the motives can be contested. The “encounter” of Rehman Baloch aka Rehman Dakait as well as the empowerment of Peoples’ Aman Committee confirmed that Mirza meant his business, and was willing to go to any extent, especially considering his terms with the top office of Pakistan.

Of course, Karachi has been ruled by a “vague yet bloody pact” between the political stake holders of the city namely ANP, MQM and PPP since the election in 2008. On and off, the city has erupted into violence on not so explicit issues, with the return to normality once top President aide Rehman Malik landed with “carrots” for the allies.
This honeymoon of politics witnessed thousand of Karachiites, political and non political becoming prey to stray or directed bullets.

A week back Mirza shook the foundations in Islamabad as well a 90 Karachi after going public with what he had against MQM and his own party man and Pakistan’s Interior Minister, Rehman Malik. What has been whispered from so long was given the vocal power by none other than Mirza. He labeled charges from treason to illegitimate practices on the Minister as well as MQM, claiming them to be the mother of all evil suffered by Pakistan. Accompanied by hardcore evidence against MQM and Malik on issues like Wali Babar murder or setting free terrorist, Mirza reaffirmed the seriousness of his claim by keeping the Holy Quran over his head as well in his hand, signifying that their will be no return this time around. Less than a month back during a dinner hosted by ANP in Karachi, Mirza made his way to journalist where he thrashed Altaf Hussian by labeling him the biggest killer, and blatantly claiming his meetings with MQM rival fiction chief Afaaq Ahmed.

When I say Mirza means business this time around, it refers to the implication this step will have for the political landscape of Pakistan, or rather I should say that this initiative will set the future code of political orientation in Pakistan. Mirza’s outburst has been translated in different manner by various pundits across Pakistan, and there is hardly a unanimous verdict on what let Mirza to break the norms of the game, or who used Mirza to fire this deadliest shot. I have tried to sum up this development in the most reasonable circumstances, considering the timing, outcome and implications as the primary attributes.

Mirza as the “King Man”

This version facilitates the much contested version that Mirza has all the blessing of the President behind him, and politics has been played up to the mark. On and off Mirza card has scared the once all in all MQM in Karachi, and the final bow has been timed perfect.

If one goes with this theory, it has more to do with the preparation of upcoming elections. President Zardari and his party has faced all the wrath from internal Sindh, their political base for keeping MQM with them instead of taking them head on. The worker on the street has memories of 12th May 2007 and BB’s reception massacre in their mind, and it’s hard to take them away until justice has been done. On macro level this orientation with MQM and ANP had given the President his lifeline to rule in thorny condition, in the absence of PML-N and PPP has managed to keep the “number equation” on its side. Now with elections on the corner, PPP will drive the wedge between MQM and itself. The past will be undone with the argument of greater good for Sindh and Pakistan, while for future MQM will be paralyzed by the sins it has committed in its track record. More evidences will pour out, carefully hidden under the carpet so far.

Mr Malik will be the perfect “escape goat” for the follies committed by the Presidency through out the last 3 ½ years. Being an infamous man with tremendous authority, he will be blamed for the wrong policies maintained in Sindh, especially with his base from another province. Rehman Malik has served well till now, diverting all the conspiracy theories and investigations upon himself from those who should have been answerable, and any time soon he will have a graceful exit as he has nothing to loose with no political future what so ever after the present team goes away. Mirza will be the knight in shining armor for his friend and the President, who was mislead by his cronies and the fairy tale will end with an impressive for PPP in upcoming elections, by hook or by crook.

Mirza and the “Invisible Hand”

The 1st theory is highly valid, considering the game plan and the future fruits it has for the whole company, and also considering the roots Mirza has in the present setup as well his base in Sindh politics. Yet another theory, based on the history of Pakistan politics cannot be ruled out, which is the influence of 3rd party (Agencies) putting its weight behind Mirza. His position, closeness and roots make him the most valuable asset to be discarded from the existing setup, just like Qureshi on Raymond Davis a few months back. The other argument to support this theory are the nature of charges imposed on MQM and Mr Malik, which can easily qualify them for subversion if portrayed in a specific manner. Letters to a foreign dignitary offering them spy services and street power (MQM) against one’s own national interest has only this meaning, and same goes for using influence to set free public enemies (Malik) who are destroying the peace and harmony of cities and ethnicity.

Above all, the inclusion of COAS Kiyani, General Pasha and CJ into this issue, coming out open on them to take notice means that they have no way to stay at arm’s length on this issue, considering the proofs Mirza has belong to the respectable spy agencies they head or monitor. President Zardari is also in the middle of the debate, when questions will be raised about his ignorance or silence or lack of action on such a sensitive Intel, being the top office bearer and supreme commander of the forces. Justice delayed is justice denied, so what goes for justice restrained????

This is the picture we have till now on the “Mirza’s Bomb” dropped on Pakistan’s political landscape. The timing is perfect, so will be the implication, the only piece out of place remains the king maker behind this saga, and you have all the good reasons to choose your answer from the equation on top.