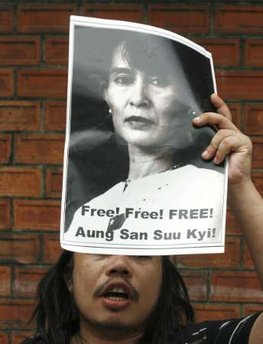 Till now, events in Pakistan have always made me feel that in any case we are the most oppressed masses in the world, which are subjected to injustice from birth to death. I still hold this idea to some extent but one case has always compelled me to think in a different way and that is of Aung San Suu Kyi.

She is a decorated women politician and human right activist, who also holds the honour of having being awarded the prestigiousNoble Prize, but unfortunately since 1990 she has never been released. Her mother land, Myanmaar or Burma is ruled by a military dictatorship, better known as Junta. In one way or the other she has been denied freedom. Just for a record, she won the 1990 election with massive majority, only to find herself in bars after that. This morning, once again through a fake case, involving a US journalist breaking into her house and interviewing her without court permission, she has been sent to another 18 month of prison, while she has already been in jail for well over 19 years.

Her peaceful struggle is the center piece of her career, always urging her supporters to remain peaceful. One year back, it was the holy monks which joined in thousands to protests, but it was crushed brutally. The most sad part is the fact that the illegitimate government of Myanmaar is supported by states like France, only because its Oil giant TOTAL has immense investments out there.

Let us celebrate human rights, and stand against its denial no matter where it happens, so that even in Myanmaar she can hear that we do respect her mission and her struggle.