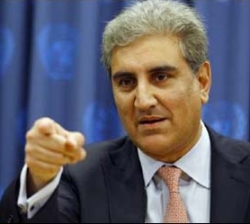 Pakistan has got its new cabinet, and like all our 180 million population, I am hardly attaching any hope from them. In simple it’s the old wine in the new bottle, a league of incompetent appeasers who care for nothing but exclusively their foreign masters.

It won’t be fair if I term it as an exclusive honor of the today’s PPP centric government. Unfortunately, like an evil spirit Pakistan has been haunted by the ghost of appeasement, disloyalty, corruption and mismanagement in its entire 63 years history.

Nothing has surprised the masses more than the absence of ex FM Qureshi and Information Minister Kaira from the cabinet. Both hold strategic position in terms of PPP claim on Punjab and their sudden termination from the front line has caused a storm of conspiracy all around. It wasn’t expected we all agree, but thanks god unlike BB’s murder its not unexplainable. President Zardari has retained his arsenal in the shape of Rehman Malik and Babar Awan, making sure that nothing changes from the way he and his team has managed the affairs from the last 3 years or so.

Qureshi has never been close to my heart as such, but after reviewing my position from the last 3 days I failed to find a single reason of my perceived disliking. His tenure started with a bumpy ride with the controversial Kerry-Lugar bill and later Dr Aafia’s issue, and things didn’t change till the day he got his final chit. Better late than never…

A small element of patriotism, or you can term it “Pakistan 1st” entered his soul on the issue of Raymond Davis, the American assassin under police custody for creating an 1850’s “Wild Wild West” scenario in down town Lahore.

As reports are pouring in from every quarter, Mr Qureshi plainly refused the version of our top leadership in terms of declaring Raymond immune from local justice system of Pakistan. Spearheading this campaign of showering humanity for those who plan our breakup in 2013 (With reference to CIA great plan for South Asia) is none other than our Ambassador to US Hussain Haroon (Better known as US chosen Ambassador of Pakistan to US), Rehman Malik and Mr President himself.

It reminds me of an event some three years back when our self proclaimed Emperor in exile Gen. Musharraf endorsed a unique dimension of Asoka teaching. His blue eyed Minister Ansar Burni dispatched a known spy Kashmir Singh back to India with full honor, as if his valuable service has served Pakistan in the most desirable manner. This happened exactly at the same time when our Rangers were receiving drilled, burned and electrocuted bodies of Pakistani prisoners from India after they have committed barbaric crimes like loosing their passport while touring India to witness cricket series or caught trespassing Indian territory while chasing his sheep. With this example in front I again wont blame PPP led coalition for its love and affection toward Mr Davis.

Getting back to the point, not only did Mr Qureshi disobeyed his masters internally but did the biggest mistake of saying “no” to the noble Obama iron lady, Hillary. So like before Uncle Sam has done what it is best at………destruction. Mr Qureshi was in short fired for being honest and loyal, and any future upcoming politician under present regime must understand that these two attributes are not welcomed here at least.

Mr Kaira, well he was simply a man of principles who knew that his strength came from the masses, not from the unseen and this noble philosophy has costed him his job. Of course Sherry Rehman and Kaira can never match the wisdom of Firdous Ashiq Awan, and so naturally the most competent person has got this job (I can even feel the walls laughing).

To cut it short, it has come as a pleasant relief that when time came, boys got separated from men. Mr Qureshi and Kaira deserve more than appreciation from our side, for standing up when it mattered. One can call a murderer insane, but calling him a diplomat enjoying immunity is a label of shame on each and every Pakistani. Foreign Office under Salman Bashir and Qureshi, government of Punjab under Shahbaz, judiciary under CJ and boys in uniform under Kiyani have really done exceptionally great in these circumstances, by resisting the pressure of Americans who earlier diverted our foreign policy by a mere phone call from an under secretary. Whoever assists Raymond in getting immunity is the real murderer of those 4 innocent souls and neither history nor divine justice will forgive this treachery. The victim’s wife committed suicide after witnessing the top executives attitude……..and still we hear them claiming immunity for the murderer.

“If I had done a crime like this, I wouldn’t have claimed immunity”

I wonder about those who are defending immunity on his behalf, do they sleep? If yes atleast I need those pills which can satisfy you after such disloyal stance. Both Kaira and Qureshi were culprit of the fact that they never had any corruption scandal under their belt. I mean in all they were misfit in this league of extra ordinary…………where rental power goes to Raja Sahab, Harris Steel mill credit goes to Mr Awan, copper and gold mines goes to the top layer and hajj scandal…….leave it na who cares it wasn’t in billions.

To end on a good note…………….the change has started. What more interest me is that it isn’t from the bottom exclusively, but the top has also joined.