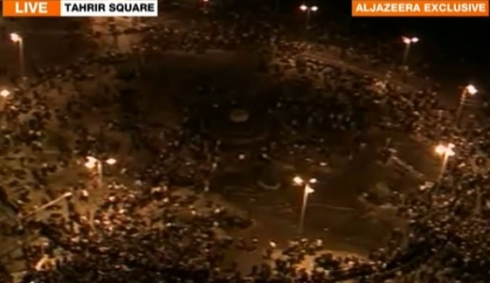 Tunisian revolution has a great impact on not only in its neighboring countries in North Africa but also in Arab world.

Anti government protests and demonstrations have spread across Egypt where people are highly inspired by the revolution brought about by people at grass root level which led to the down fall of President Zein El Abidine Ben Ali.

Hundreds of thousands of demonstrators have protested in Cairo, Alexandria and Suez.

President Hosni Mubarak has clanged to power with his regime from last 30 years and people are deeply frustrated over soaring corruption, lack of justice and basic needs.

Thousands marched on the streets of Cairo, calling for ousting of President Hosni Mubarak. Hugely deployed police and security forces were not able to halt the marchers and protesters. In panic government blocked all sorts of communication like internet, cell phones in order to suppress the uprising.

People are demanding the ousting of Hosni Mubarak and they want a new government according to their wishes which caters to the masses at grass root and do not fill their own pockets.

Social networking websites like Face book and Twitter have played a great role in the uprising. Protests were called by a page set up on face book in the name of a martyred young Egyptian man who was beaten to death by the police.

Egypt has never seen before such huge uprising and display of anger.

No one is sure whether this mass movement will bring about a revolution in Egypt or not but one thing is sure that it will definitely bring a change, a change Egyptian people have long been dreaming about.

The revolution in Tunisia and the uprising in Egypt give out a strong message to the authoritarian regimes around the globe that no regime or reforms can withstand against the will of the masses at grass root level, kudos to the power of people.

1 thought on “Uprising in Egypt: an Impact of Tunisian Jasmine Revolution?”