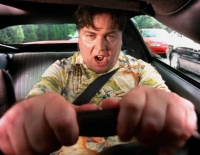 I felt like blowing myself up along with the check post in front of me. I tried hard to control this strong desire but found myself failing terribly. I thought of the ways I can accomplish the goal easily and quickly. Each moment was like eternity. I looked at time on my cell phone every ten seconds and realized that I’m already late by 20 minutes to reach my destination. I was sure I started the journey at the right time. I cannot do anything about it.

And then signal turned green and traffic started moving like a snail, making its way through the zig-zag check post. I moved a bit and applied the break immediately, saving myself from bumping into the car in front of me. I moved a few meters and see another check post…..! I cursed the traffic, the check post, the police looking into the cars in hope to find a suicide bomber, a Taliban or an unfortunate chap without documents or the car with door glasses covered with shades to prevent the intense sun rays.

I made my way through the traffic and the check posts, as many as I can count on my 10 fingers conveniently and reached office. I was late…….. like yesterday! All wet with sweat I went to the rest room, splashed my face with water, cleaned the dust on my glasses and shoes. Next, I took a glass of cool water, took deep breaths for 5 minutes and boot up my laptop. Few more moments passed and I managed to regain the energy and put myself in working mode.

I experience emotions and frustration described above at least 5 times a week, 2 times a day. First, while going to my office and second coming back home in the evening. Thank God Saturday is off. I remember the traffic situation in Rawalpindi and Islamabad was not this bad few years ago until the development authorities decided to build more roads for better commuting. The Rawalpindi traffic management authority’s effort to ensure smooth traffic flow resulted in blockage of many passages opening on to Muree road. This not only resulted in more time to destination but increased transport fares as well. No need to mention the frustration to travel the distance in 30 minutes that could be covered in 10 minutes earlier.

This doesn’t stop here. The government, in its earnest efforts to prevent suicide bombing built infinite check posts, spread all over Rawalpindi and Islamabad. Though it didn’t stop the suicide bombings but helped the citizens develop patience in them and understand the value of time. Higher fuel consumption, higher wear and tear of vehicles and ultimately higher cost. Thank you RDA. Thank you CDA. We love you so much!

Not forgetting those 90, 120 and even 180 seconds long red signals that make you feel a miserable citizen of a third world country. The long queues building up due to these long signals aggravate the very problem for which signal is kept red for so long. One wonders, what traffic police thinks and feels about all this. How do they come up with such solutions and how do they get the courage to actually implement them.

Lack of planning, rather no planning at all, worst possible work-arounds and untrained workforce, all resulted in a chaos that the commuters of twin cities go through on daily basis. The road network expansion in Islamabad proves to be inadequate during peak hours. The only fly over, built after several months with millions of rupees has proved to be unplanned and insufficient. Even CDA has accepted the flaws in its development.

The old stadium road linking Rawalpindi and Islamabad clearly require an under passage. One could tell this when the road was being expanded that It would not serve the purpose. Now, the authorities have come to this realization that an under passage is indispensable. So should Pindiates get themselves ready for another 2 years of pain and frustration?

The examples of RDA’s poorly planned roads, randomly placed speed breakers, hour long traffic signals are in abundance. One wonders if the authorities of both cities can learn anything from Karachi and Lahore, leave aside the international cases. Can government arrange training for the traffic policemen, found in abundance on each signal? Will the traffic police and development authorities ever learn not to plan things to cause traffic jams? After many years of experimentation by traffic police in Rawalpindi and Islamabad, the answers are yet to be found.

2 thoughts on “The Road Tragedy: A Commuter’s Dilemma of Traveling Between Rawalpindi and Islamabad”