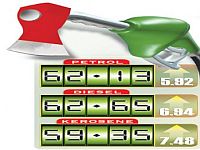 Nothing new, it seems that we as a nation have become immune to injustice. Every now and then, the group of elected as well as selected clowns will deliver there verdict, and we as a nation of obedient masses will say “yes” to them.

The “petrol bomb” is nothing new, but the logic that follows it is a pack of entire rubbish. Where the prices dropped from $150 to $26, all we could get was hardly a 15% off, where it should have been 60%. And while still the oil is hovering around $70, an increase of massive scale has been delivered on the masses. Is this a joke?

The league of “beggars”, God knows from where they have been installed over us, have decided finally that its a begging spree that will save them, and be sure they have no alternate in mind. IMF injustice is not the answer, it is just another banking institution, which doesn’t care if million die, but all it needs is to multiply its assets. Imagine Kerosene oil has surpassed petrol in this short span of time. Just for a reminder, move into any rural or under developed town and you will find this as a main article. So they are all out to destroy the most deprived class. Whether its Shaukat Aziz or Shaukat Tareen, there economic indicators are showing progress, but unfortunately its only confined to a few and that also restricted to the capital.

The budget, as mentioned before, has nothing significant, and this hike in energy prices and other shows that the establishment is planning in weeks, rather than years as it use to be. If things have turned so ugly, and I don’t have any doubt in this fact, where is the impact on the establishment,, which one of them has given a sacrifice. Its hard to make them understand that it’s the masses that bring them into power(if they are not installed by some outside force), and they are the one who can throw them out.