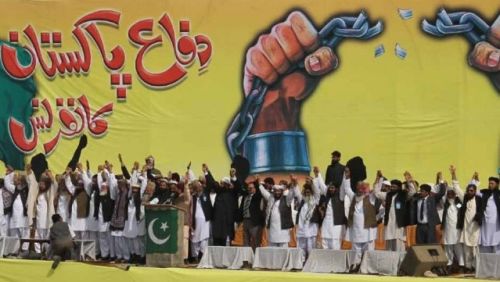 Lately, the combine wrath of media, civil society and public at large has centered around the ever increasing extremist forces in Pakistan, whether labeled as “Jihadis” or some time referred to as “the league of brain-washed”.

Musharraf, post 9/11 did his best to build an opinion at large against them, but it stands true that his efforts, though immense in terms of money and manpower did little. Infact, his onslaught against the “Jihadis” brought him twice close to the final resting place, with extremely well planned and calculated attacks that shook even the ranks of our armed forces to some extent, with internal inquiries and punishments. The fury of the earlier “ours”, like Ilyas Kashmiri got unleashed somewhat after 2006 with groups going rebel against the state policies, especially the one favoring our newly revived “Masters” America.

I remember the episode surrounding “Lal Masjid”, where in public eyes for the 1st time the extremist forces clashed head on with the designated defenders of this state, the Pakistan Army. Let me clarify that even in 2003-4, Pakistan Army was engaged in active warfare with groups led by Kashmiri, Abdullah and Baitullah Mehsud, but Waziristan being the center of activity, hardly anyone had the clue about reality of the situation. The public, having seen and witnessed them as the second line of defense, were not that liberal to change their views. Even the “Lal Masjid” episode did not change the way 180 million nationals of our land saw or felt about them, and I can recall the campaign which followed at every level to justify the heroics in the Federal Capital. To cut short, being undoubtedly bonded with the faith and the soil, the Pakistanis have always reverted to the orthodox repute attached with the non state militia that we have possessed.

The breakthrough, desperately sought after by forces across the Atlantic and within us in reversing this trend, came when wave after wave of living bombs (suiciders) struck every inch of our land. Without distinction of mosque and school, child or mother, the barbarians some hired some sent crossed every limit that the civilization had set for itself in the evolution of mankind.

With this, the unheard and the unseen sentiments of the public at large did reverse, and once thought by few started being heard more often. In all, it became a voice of all that in some shape or form, the forces within us, have to be brought under someone’s reign.

The democratic government got another breakthrough with the 26/11 attacks in Mumbai. Well I thoroughly disagree that it had anything to do with the state or non state affairs of anything present inside Pakistan, but it stands true that with international pressure behind their back, the government had all the means to clamp on them, and it was done to some extent as well.

The boys in uniform, once they started taking out enemies of the state in the shape of TTP, the public at large stood by them. No one looked at a party or a “Jamaat”, but looked at themselves as the defender of this motherland. This is what pumped the spirit into those holding guns, while they swept Swat, Dir, Bajaur and South Waziristan from evil and “unfriendly neighbors” imprints.

But it seems, and is today witnessed that the initiative and the drive which we received from above stated incidents, got lost with a vague and undetermined policy by the executives, and their respondents. May 2nd was the starting point for this reversal, with foreign boots getting in uninvited (as what we know) and returning unchallenged after tarnishing whatever myth of sovereignty we had. To be precise, the helicopters did get detected, the information did flow to the top level, but it is a reality that the top office bearer (presumably civilian and found writing article in foreign papers the very next day) revoked any planned action against this global humiliation.

The forces, going in the background soon converged to a united platform, seldom heard of and what we see today as “Defense of Pakistan” council. Gaining public support which was shocked at the shameless inaction of those in power, they were soon back on streets declaring their return, and exhibiting their strength, not seen in the past decade or so.

If the stain of walking hand in hand with a friendly enemy wasn’t enough after May 2nd, the US struck one other nail in the coffin of Pakistan’s existence by killing 28 of our soldiers, in cold blood. The same inaction, which was witnessed in Abbotabad proved fatal as they were left as target practicing ducks against the grand US/ ISAF onslaught.

The government did rally behind public sentiments by announcing blockade of all NATO/ American supplies through Pakistan indefinitely, but failed to gauge the intensity of public mood. Like May 2nd , they were again asking why an intruder, which isn’t friendly has left unchallenged or unharmed, whereas we know and we firmly believe that our boys once unleashed won’t give them the garden jog they had in Iraq or Afghanistan. The 8 month odd blockade, with demands like no to any weapon crossing, massive increase in taxation, seize to drones attack and legitimization of all undocumented understandings was seen as a focal point for the state to reaffirm its role, more internal than  external but somehow like previous idiocy, they have again hit the dead end. The blockade, a brave move which did bring Americans to its knees, and it was evident, has been dropped in the most juvenile manner.

The economic hardship, 100% as a result of corruption and mismanagement, has taken its toll on the top office bearers and the demands along with blockade have disappeared like fallen leaves. The apology, even if you call it, was more humiliating than anything else. The Americans very wisely used multifaceted frontier to bring us down, and they did succeeded very convincingly. The cross border raids from “God Knows Mars Militia” as witnessed in Dir, out of nowhere arrest  of a key person involved in 26/11 in most amazing circumstances along with his unseen and unheard confession was enough, infact more than enough. The brotherly America, for those who see it that way has reaffirmed its policy of use and dispose, and rest assured that in prevailing circumstances with these chartered democratic masters above our head, we will most definitely acquire it once US rolls the end game from Afghanistan.

As I write, the DOP has left Lahore for a long march till Islamabad, and they have more than enough logics to bring masses under their flags, thanks to the unwise leadership at every level we have been gifted with. The government, in its all position of strength, has failed to agree Americans to a single demand, let alone a collection of measures. The drones will keep flying, and killing and all we will have is Ms Khar reaffirming to the nation that the 50 odd sitting in cabinet have mastered the book of global politics, patriotism and nationalism and they will spiritually lead us to the path of heaven through “White Masters” appeasement.

We hear all the way that forums like “DOP” get assembled through some agency, which brings them into motion. With the treachery and tyranny climbing to the level never seen or heard of, its better that forums like DOP remains tainted wth the aid of invisible hand, otherwise if the public again changes its mood to the way it was a few decades back, this storm of any sort, with just a slogan of restoring Pakistaniat, will wipe away all ethics and norms we have erected, though such policy making in my book only qualifies for appeasement exclusively. May be we have already surpassed the internal grey line, which guarantees peaceful coexistence.

Is the Ghairat Birgade really a fabrication, or may be we will witness it very soon than was calculated? Lets see.

1 thought on “The “Defence of Pakistan Phenomena”… A Bitter Factsheet”