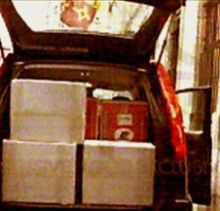 Media today is abuzz with news of mysterious cartons dispatched from New York to Lahore, whose consignee is the “most-important” personality in President House. Incidentally, the cartons traveled through PIA PK 722 which was also boarded by Defense minister Ahmed Mukhtar after attending the strategic dialog in USA.

According to a news item in Daily Express the cartons were loaded without any passenger, violating US Laws while some cartons were booked from cargo on Thursday by PK-724 flight under the directives of Pakistan ambassador to US, Hussain Haqqani and no fare of these cartons was charged. Nor any airway bill was prepared. PIA and Pakistan embassy sources are neither contradicting nor confirming the incident. The news report also claim that the cartons sent by cargo contained books of Benazir Bhutto while the cartons dispatched from the counter of PK-722 contained costly goods.

The current situation reminds me of ‘some cartons’ that were about to be moved from Geneva to London in James Bond 007 style but caught on camera by Geo news in December 2009. The story started when Prosecutor General of Pakistan deposited some evidence (apparently in cartons) regarding Swiss money laundering cases in Geneva in the era of former President Pakistan Pervez Musharraf. After the promulgation of NRO, these cases were closed.

However, now that the term of NRO is over, it is all the more likely that these cases could be reopened and these evidences could be employed against President Asif Ali Zardari. People around President and PPP are more likely to be “Shah se ziada shah kay wafadar” So, Pakistani High Commissioner in Britain Wajid Shamsul Hasan escorted a secret operation in Geneva. The proof of the Swiss cases, stuffed in 12 cartons, was been taken over by Wajid Shamsul Hasan and the sacked National Accountability Bureau prosecutor-general Danishwar Malik but they were caught unaware and filmed by Geo TV right outside Geneva offices of the Pakistan government’s lawyers.

Later on it was alleged that the boxes have been ‘quietly’ moved from the HC building to the residence of the Pakistani high commissioner in London and allegedly opened, inspected and tampered with despite repeated assurances to the contrary by the high commission. Wajid Shamsul Hasan declared that he was designated by the NAB for this purpose but NAB chairman Naveed Ahsan rejects the claim at that time.