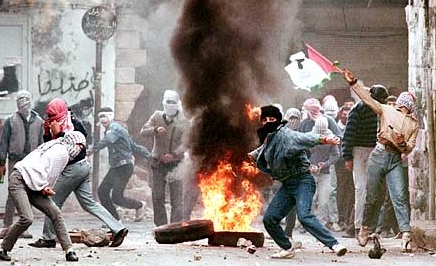 Out of nowhere the wave arrived…. and like an epidemic it is sweeping the oil rich kingdoms of Arabia. Initially it has dislodged the Pharaoh’s of 21st Century, in the shape of Hosni Mubarak and Zein el Abidine Ben Ali and in case you are of the view that it will end here, you have misconceived the situation altogether. The “Domino Theory” of Cold War seems to be acting this time around, and in the second stage we can see the Iron Man of Libya, Muammar Gaddafi, and Bahrain’s ruling family on their way into history.

I will keep the cards close to my self otherwise the wave of freedom, masses will and justice have infiltrated Yemen, Iran, Iraq, Jordan and Saudi kingdom as well and keeping them out of this changing equation cannot be fair at all.

Any how, we can call it intifada, renaissance or awakening but there are certain aspects of this episode which cannot be ignored or side lined at all. Firstly there is no harm in keeping an opinion that the masses have taken enough, they have been stretched to the edge and finally they have decided to raise their head…….agreed. This version can be endorsed without any reluctance keeping in view the circumstances in which these crowned and uncrowned emperor’s have ruled them in the past.

So logically, the boiling steam needed an outlet and when it found one, the prevailing system proved a wall of mere sand. But then I am left with one question which is not at all an ordinary question, and without its answer it’s impossible to pass on the final verdict on this case. The “God Father” of this Mafia, the patron of all this injustice and the biggest beneficiary from this dark era………… you guessed it right, Uncle Sam cannot sit idle and pass on statements based on morality and free will. In short, this prevailing order till now has been sustained by them in one way or the other and being the superpower (no more uni polar I agree) such a drastic change right under their nose leaves some questions unanswered.

Lets put it that way. Obama and his league of not so extra ordinary gentlemen in White House and Pentagon have lately run out of excuses to keep floating their policy of ruling Middle East by their few appointed trustees. This happened because either these figured have failed to deliver lately or the masses have stopped buying the excuse of they being their leaders. In any case they have now come out with redrawing the landscape of Arabia, and this time it wont be leaders of their choice. Instead, welcome to the era where leaders of our choice will be compelled to work on their charter by the circumstances and power politics prevailing around them. So in short, the situation has been reversed from imposed rule of an individual leader or a family to indirect rule of circumstances and situation.

Now with the heart of the Muslim world filled with new faces in a short while, US and its allies can prolong their existence in this form for who knows another century. Revolution in France (1789) is referred as the milestone for the awakening of masses, when the masses came out to out throw one of the most well established monarchy in the Europe. But be clear, just after a decade of French Revolution, the same masses crowned Napoleon as the new emperor, negating their earlier stance of accepting the will of the masses as the will of divine.

In no way my writing in to undermine the struggle of the people facing hardships in Egypt, Tunisia, Libya etc but I must say that there is more to the story than what we are watching right now. The revolution in Arab World has the attribute of blood shed in it, one of the primary catalyst but it lacks two things namely prominent leadership and above it a clear path they opt to follow.

Lets not break our hearts or get dejected, even if these reservations hold true still Americans cannot be the final deliverer of our fate. May be they have misconceived the circumstances and the same masses brought out to depose their disposed allies turn their hand once again on those selected for the future by them…………….. they say time heals every thing but in this case I must say time will rather reveal everything, just hold your horses!!!