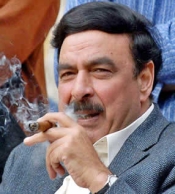 The fairy tale is over for the once voice of Rawalpindi, Sheikh Rasheed with PML-N reclaiming the throne of this city. All the hype, controversy finally came to rest, where as many die hard followers of him till the very last moment still believed that out of the blue Sheikh can pull the impossible, but this wasn’t to be. As it has been claimed earlier, this defeat has once and for all finished the chapter of this man in the book of politics and he is history. I will not deviate from this assumption, and if its upto me I would say that it ended way back in 2002.

So this is all we have heard around, and till now I haven’t added something new, so why am I writing something at all?? Well there is a lot to the story that has gone untold, and his end in the world of politics may have ended the strongest public representation in the “corridor of power” that we ever witnessed. On the back of my mind as a Pindiite we never had nor we will ever have a leadership so close to us, but at the same time the story narrated here will reveal that above a city or community, we hail every thing to Pakistan, and when the two factors coincide there is no second option but Pakistan 1st…….

Out spoken as he was, transparent as it was proved time and time again, Shiekh was a political world in himself. The Famous Lal Haveli was no different than what we have read in history books, where you can walk into the court of Mighty Kings, ring their bells of justice and get heard at the very first instance. This was what that place was for us, and this is what the Sheikh of the past was to us. How many of you have seen your representatives roaming in the down street, eating with every one, mingling in a way that you were left guessing is he really the same guy? Many times in the morning rush hours we would come across a person with his famous “Castro like Cigar”, sitting on the foot path administering the sanitation staff at work……this was the Sheikh we knew. On the eve of 14th August their was nothing good about the night, but only his traditional speech and the famous fire work at Lal Haveli. But as they say “time and tide wait for none”. In this city of millions, our politics started and ended on him until lately.

Through out his career he has been engulfed in many controversies, from his social life to the Kashmiri Mujahideen connection, this is why I say the political horizon of this city revolved around him. The electronic media wasn’t there but it was like Eid when Sheikh was set free from the notorious Adiyala jail during late BB’s era. It was like masses on a rampage around his caravan as it moved from the jail to his residence. Last but not the least, his contribution to the educational infrastructure of Rawalpindi cannot be left in this brief profile. For women education during his reign practical steps were taken never seen before.

Here I end this short tale while I have termed as “leadership lost”. Whether it was his close association with General Musharraf, his silence over the Lal Masjid issue( I wonder what could have been achieved in case of his disapproval) or his betrayal to Nawaz Sharif, Rawalpindi has lost its icon. The blame is on him, because he ventured into those areas of politics which were out of his wisdom, his decision to go against the tide when it is clear that PML-N holds the key to this region and much more. But I am mourning the loss of a leader who has gone down in history as a looser, although he was blessed with certain attributes which many other totally lack. I salute you Sheikh for what you have done for us, and we have loved you for it. For this city there will never be a leader equivalent to you, but we are sorry that circumstances have brought us to a place where we can not uphold you any more.

The real Sheikh ruled the heart, and never required any position in the national assembly. You can still retain that by place by starting some social work or an organization, because the elections have ended, not the miseries of the people of your city.

May Allah bless this land of pure.