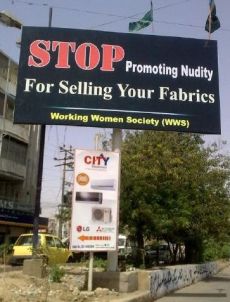 The fashion scene has changed in the metropolitan cities of Pakistan, especially in Karachi, since the arrival of what is now known as the Lawn wars. One textile company after another, followed by one designer to the next, and followed by every Tom, Dick and Henry, have launched their brand of lawn – or the fabric that is used for summer wear by women.

The elite go crazy over the new prints, wearing them for few weeks and handing down to maids – to go out again and hunt for fresh skin.

The Lawn producers are not content with having their exhibitions at top hotels of Karachi, at the Expo Center, even at the wedding halls. They have polluted the city with their humongous billboards, mostly featured with women clad in half decent attire. One wonders what kind of fabric they are selling as most of the ladies on those billboards are dressed in rags and strips.

The citizens of Karachi are now waking up to this on going promotion of indecency and obscenity. As spotted (here and here) there are messages, by Working Women Society, posted in some parts of Karachi that protest against the show of flesh. 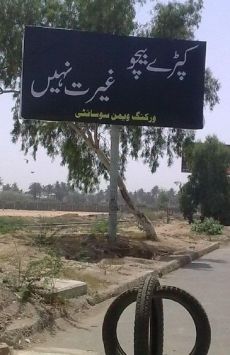 As written on one of such messages, Kapray Baicho, Ghairat Nahi (Sell Dresses, not Modesty).

And this is not the end.

After denting the morality of Karachiites, and softening up their resistance to indecency and vulgarism, the capitalistic masterminds are applying another layer of obscenity to the streets of Karachi – by popping a veetish Katrina Kaif from their gigantic billboards.

Sad to see this happening in Islamic Republic of Pakistan, a country with 97% Muslim population.

1 thought on “Sell Dresses, Not Modesty: Karachi comes out against obscene Lawn advertisements”