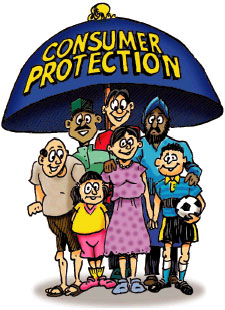 March 15 marks The ‘World Consumer Rights Day’. The occasion needs to be utilized to encourage awareness among the people regarding the consumers’ right. This year, the theme of the World Consumer Rights Day (WCRD) 2010 is ‘Our money, our rights’ and highlights consumer issues in relation to financial services. Access to stable, secure and fair financial services is important for consumers everywhere, especially under the strain of the global financial crisis.

This day has a historic importance as it was on this day in 1962, when the Bill for Consumer Rights was moved in the US Congress. During his speech President John F. Kennedy had remarked:

“If a consumer is offered inferior products, if prices are exorbitant, if drugs are unsafe or worthless, if the consumer is unable to choose on an informed basis, then his dollar is wasted, his health and safety may be threatened, and national interest suffers.”

In 1983, the Consumers International set March 15 the World Consumer Rights Day, stipulating that consumers are entitled to enjoy the rights of safety protection, obtaining correct data of products, free decision to choose and the right to claim for compensation and the right to have a sound healthy environment.

In Pakistan, the consumer is left at the mercy of shopkeepers and manufacturers. The markets are flooded with substandard, look alike and counterfeit products and Pakistan has become a dumping ground for semi expired food, beverages and medicines. The worst enemy of the consumers is the consumer themselves if they refuse to exercise their rights and purchase products and accept services without checking price or quality. Every now and then companies launch attractive buy one get one free scheme or coupons for balloting prize schemes but if the Manufacturers are sincere to consumers, then they should decrease product price, instead of launching schemes.

In June 2009 City Naib Nazim Ms. Nasreen Jalil had announced the launch of consumer protection ordinance for Sindh Soon. Unfortunately it has not been implemented yet although signed by Dr. Ishrat ul Ebad, Governor Sindh, three times, but has always lapsed, because it was never presented to Sindh Assembly for ratification. The last time it was signed by the Governor was on 25th October, 2007, but once again lapsed because it was not presented to the provincial assembly and today, Sindh is the only province that does not have Consumer Protection Law.

Many products which are available in the market are not even registered with Pakistan Standards and Quality Control Authority (PSQCA). It is worth mentioning that the official website of consumer rights commission of Pakistan CRCP has not been updated since 2008.

Not only legislation is the need of time but its effective implementation is vital. Government is not successful even in controlling price hike during Holy month of Ramadan when prices were sky high. If consumer courts would be operational in every city and province would any one bother to file a case against any manufacturer? When will consumer be able to have value for his money in Pakistan? The questions need to be answered yet.