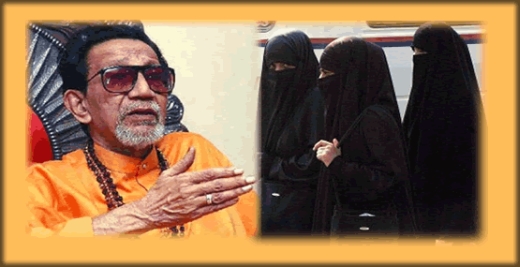 There is a saying in Sinhalese, “One who has received a beating with a firebrand, runs away at the sight of a firefly”. Similar proverbs in other languages are “A burnt child dreads fire” (English) “A scalded dog fears cold water” (French) and “One bitten by a serpent is afraid of a rope’s end” (Jewish).

However, the Shiv Sena doesn’t seem to get the jist of these expressions. It seems to behave like a spoilt brat who refuses to learn from it’s mistakes.

Seizing on the case of the theft of an infant, allegedly by a burqa-clad woman , and taking inspiration from the recent ‘ban on burqa’ by various European states, the Shiv Sena has now sought a similar ban in Maharashtra citing Security concerns and not Religious ones.

True, the CCTV footage points to a burqa-clad woman as the prime suspect of the theft of a two-month old baby and true, the burqa can be and is misused in muslim-dominated areas as a means of bogus voting during elections. But there are other ways of bogus voting too and using the burqa for this purpose is nothing new. Moreover, calling for a ban on burqa, based on one such incident of theft is stretching things too far. Sure enough, if such acts tend to become more frequent, then radical steps may be required, but now is too early.

The best advice probably comes from Urdu columnist Hasan Kamal, “If you recall the Shiv Sena’s last few campaigns, then the demand for a ban on the burqa absolutely fits its agenda. The Sena protested Rahul Gandhi’s visit to Mumbai, but Rahul punctured its ego by freely moving in local trains. Then it opposed Shah Rukh’s `My Name is Khan’. The protest fizzled out as the film got released and became a hit. The Sena needs something new. It has got it. Muslims should ignore it.”

The one thing that Hasan did not high-light is one of India’s greatest icon; Sachin Tendulkar’s rebuke, when he said that “Mumbai belongs to India, that’s how I look at it. I’m extremely proud to be a Maharashtrian, but I am an Indian first”. That, for me, is the biggest slap on the face of the Sena. Interesting how after Sachin’s statement, the Sena has toned down it’s ‘Mumbai for Maharshtrians’ ideology. Seems like it’s time for another Slap.