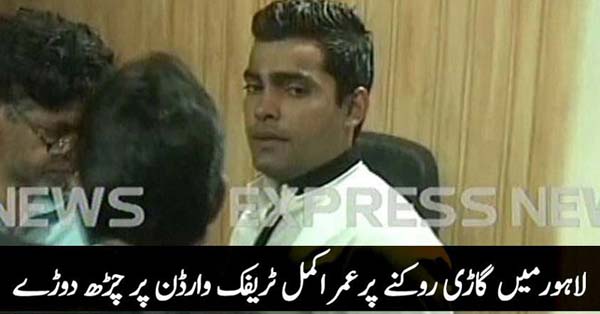 Pakistan’s second match of the now finished Asia cup saw her beat Afghanistan quite convincingly and gain a bonus point, thanks to Umar Akmal’s whirlwind of a century; aptly timed, in complete congruence with the issuance of his arrest warrants for not attending a hearing of the traffic warden case he was indicted in.

Keeping with our habit of making punch lines out of any situation, jokes started circulating around the internet linking his performance to the humiliating court case initiated against him, soon after his brilliant performance on field. But some made a complete mockery of the whole incident itself, displaying the hollow moral foundations of our society at large; making obvious the reasons why we are where we are today, in a lawless country where people go missing for years an end and where terror looms day in and day out.

It was this expression of support for Umar Akmal besides a picture of his arrest warrant that caught my attention. Considering it to be another of the many jokes already circulating around, I opened up the comment section to enjoy and celebrate in the comic relief after a day’s worth of work. Instead I was left bitter and angry. The traffic warden was being touted as someone who filed a complaint against the “national hero’’ to gain some popularity and was being criticized for not giving due respect to the match winning century maker. As if the oxymoron of national hero and alleged law breaker was not enough, a case was being made for the young cricketer based on the fact that the very same traffic-warden-criticizing-people were never made to pay fines in the land of the pure whenever they were caught by police driving without license; that the police is inherently corrupt and preys on famous people to give a bad name to the country. The whole logic of law had been twisted completely to safeguard some “national hero” and save the name of a country famous (read notorious) for, for one “selling”” driving licenses. As if the definition of national hero was not abstract enough, the law of the land was being colored in different shades of heroics.

While the theory of “two wrongs do not make a right” was being blatantly shamed, a shameless declaration of one’s disregard for the law was being made. Implementation of law was being subjected to the grey hues of nepotism, “national interest” and abstract theories; responsibility only of the law enforcers, judged only by their behavior and not by that of the common man. The common man who may find loopholes, go around the rules and bend them to an extreme without any care for the moral implications of such actions; who may drive license less or refuse to pay the fine or even get through immigration without any visa-BECAUSE the system let him. Because a corrupt system is the justification for all his corrupt actions; his moral conscience being subservient to the effectiveness (his own interpretation based on his own experiences) of the system he wants to improve but will not do anything to do so. Because of the wrong assumption that the system is not him but another being which may provide excuses for his laxity. Because… his morality does not drive him; the laws (read the implementation of law in the case of Pakistan specifically) drive him.

To quote Muhammad (P.B.U.H)(the last messenger of Islam) about the supremacy of law irrespective of cast, race or status…” By Him in Whose Hand my soul is! If Fatima (the daughter of Muhammad(P.B.U.H)) did that (i.e. stole), I would give her the same punishment.” (Sahih Bukhari 5:59:597)

I wonder, then, what our “national heroes” measure up to; where their supporters stand on the pedestal of morality, how much they weigh on the scale of human conscience and how ambivalent their interpretation of law is.