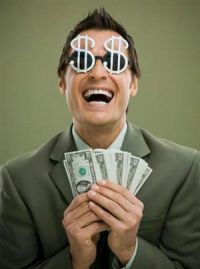 I keep hearing things like money can’t buy happiness, can’t buy love, and paise se kuch nahi hota (from tablighees). I would like to settle this issue once and for all.

Take a person who has to worry about getting evacuated because he can’t pay rent, has sleepless nights worrying about his children’s future, worries about his phone, internet, gas, electricity and water bills, worries about how he will pay the doctor’s bill, has to sleep in the blistering heat as he can’t buy an A/C, whose wife has to wash clothes with her hands because he can’t afford a washing machine, whose children don’t have toys to play with, who begs others for money, who is buried under loans, who contemplates suicide, etc.

It is obvious that money can buy comfort, peace of mind, and subsequently happiness.

Now for the argument that money can’t buy love. The answer is, there are many women who have married men because these men were wealthy, and the women fell in love with them after marriage. Also, there are many women who can and have fallen in love with poor men but couldn’t and didn’t want to marry them due to their low financial status. Here is a question. Would women marry someone who was hundreds of thousands of rupees in debt?

I rest my case. If someone still thinks money does not bring happiness and/or is not important, they can give all their money to me. 😀

1 thought on “Money Is Happiness”