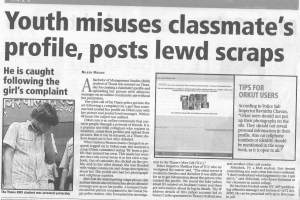 Girls are uploading their pictures on social networking websites like Facebook, Orkut, etc, to be accessed by everyone. What is happening is that many people are taking those pictures and misusing them by creating fake profiles to defame the girls. On some, inappropriate messages about the girl are written. On others, the picture is altered with a nude body of someone else added to the face of the girl.

Many webmasters of adult websites use girls’ pictures from social networking websites to promote their business, with things like, “these girls are available.” In reality, those girls don’t even know that their picture is on a website of such a nature. Pimps are also hovering on social networking websites, trying to find pictures of good looking girls for their business. Many prostitutes also use those pictures for personal gain.

Many girls’ cell phone numbers are put on websites after being taken without their consent. Some websites have pictures along with the cell numbers. In reality, those pictures do not belong to the person whose cell phone number has been posted. The pictures have been taken from social networking websites.

Below is some basic common sense that girls should follow.

– Never upload your picture on social networking websites. If you have to use a picture, use a non-animate one.
– If you have to share your picture with a relative, send it through e-mail.
– If you are in an internet cafe, please make sure you are logged out.
– Please use features such as ‘Ignore User’ and ‘Report Abuse’ if you ever get unwanted invites or messages.

According to police Sub Inspector Ravindra Chavan, “Orkut users should not put up their photographs on the site. They should not reveal personal information in their profile. Also, no cell phone numbers or identity should be mentioned in the scrap book, as it is open to all.”

Below are some real life stories of girls who went through a lot of misery because of photo tampering and fake profiles.

The father of a South Delhi school girl suffered from the fake profile of his daughter posted on Orkut that not only described the teenager as a ’sex teacher’, but also contained obscene photographs and her contact details. The teenager’s family had received the first call where the caller wanted to speak to the girl. Similar calls poured in later, the police said, adding all the callers referred to Orkut. Father of the girl lodged a complaint with the Cyber Cell of the Delhi Police’s Economic Offences after his family started receiving calls following the appearance of the fake profile.

An air-hostess had moved a court here alleging that someone has opened an account in her name on Orkut wherein she is being described as a “sex struck woman”. The family had a harrowing time when two strangers knocked at their door a fortnight ago and told them the girl had invited them for sex, they added. Police said a case has been registered and investigations were on. The air-hostess claimed that act has lowered her reputation in the eyes of her family members and neighbors. She also said that she have written to the national commission of the women ministry against her criminal defamation, but no actions have been taken so far.

It was one of those normal evenings when *****, a software engineer in Chennai, logged on to Orkut to unwind from work and catch up with friends. But one and a half minutes later, the evening turned shocking and miserable for her. What she saw was a cheeky scrap and forward to a profile that had her semi-nude photo in another girl’s profile, tagged as her sister who flagged joint hints of intimate advances and indecent invites. Her photo had been brazenly and easily tampered with. After many weeks of tension and repeated requests to Orkut, the ID was removed. She vowed never to be vulnerable again.