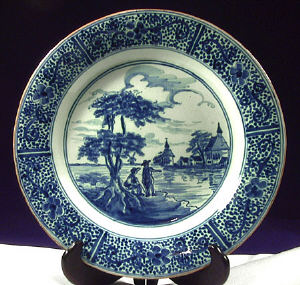 Like Multan, the history of Multani arts and crafts also goes back to medieval period. Kashi work, glazing and hand painting of ceramic products is an important art for which Multan is famous the would over. The use of foliage branches and leaves of trees and superb richness of colours (mainly blue) in Kashi work is an evidence of Persian influence. As Persian arts themselves have been under Chinese (Mongol) influence, therefore some historians are of the view that Kashi work had originally come from Kashghar China. Over a period of centuries Multani Kashi work has matured and developed a unique and distinctive style of its own.

The art has survived for centuries through generations as its trade secrets like composition of colours were zealously guarded by a handful of artist and their families. Artists like Ustad Allah Waaya and others have left lasting work in the field and their work ahs lent an immortality to the art.

In 1853, during a limited excavation on Qillah Kohna Qasim Bagh, Alexander Cunningham found glazed tiles made in Multan in about 900 A. These tiles had been used in the mosque built by Muhammad Bin Qasim on his arrival in Multan. The highest quality Multani tiles have been used in shrines, mosques and other important buildings including house ever since. The shrines of Shah Yousaf Gardezi (1153), Shah Rukne Alam, Ali Akbar, mosque Nawaban, Shrines of Uchh Sharif in Cholistan and Talpuir tombs in Sindh are classic examples of tile work. Kkashi work on the walls of shrine of Hazrat Haqani, Sawi Mosque, Shrines of Abdul Latif, and Sachal Sarmast (Sindh) Eidgah Multan and Lahore museum is very distinctive and of a fine quality. Lately Akhtar Abbas Bharwana (ex minister Punjab) has used the tiles from Multan at his house in Jhang. A contemporary artist Ustad Muhammad Alam has executed Kashi work in the house of late actor Sultan Rahi in Lahore.

The process of making blue pottery and tiles has undergone many changes with the development in technology. Gas furnaces with controllable and uniform temperature are being used for biscuit firings and glazing instead of wood and dung cake fire. Clay is being procured from Manshera (NWFP), Tharparker (Sindh) and Gujrat instead of local red clay. “Baking of raw material as per the formula, grinding, kneading, filtration, moulding, biscuit firing at the temperature of 800-850 degree centigrade, Kashi work and glazing at the temperature of 1200 centigrade are all necessary steps in the process,” explained one young artist Muhammad Irfan wile showing everything being done at his concern by 20 ceramists and 15 Kashi artist and their students. “The special blue colour prepared from cobalt oxide and copper oxide is a special technique and distinctive feature of the Kashi work,” he says. The art has evolved into a far more sophisticated process today. 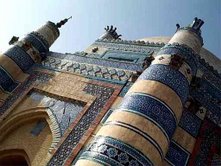 Among the various arts that are practiced in Pakistan, Multani Kashi work has attained a higher state of refinement. There is always a room to bring into the art new innovations, endow it with fresh spirit and set the science as its guide. Assistance can be sought from international agencies like UNESCO and the World Bank. The range of possibilities in the field of ceramics is very vast. The whole world can be the market for Blue Pottery from Multan.