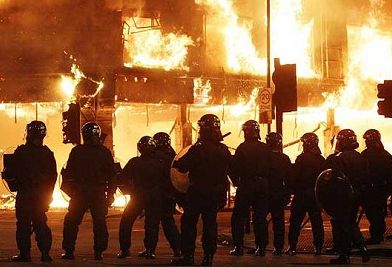 Not all Londoners are rioters. Likewise, not all Muslims or Pakistanis are terrorists.

Violence is not the legacy of a single group, religion, race, or country. It is a state of mind, arousing due to continuous build-up and subsequent outburst of frustration of some genre. Just that the global community (read = international media) labels one sort of violence as ‘terrorism’, another as ‘war on terror’ and yet another as mere ‘rioting’.

Despite all the difference in cause and purpose of the rioting, there are similarities in the riots that engulfed UK this week and those that had erupted in Tunisia, Egypt and Libya earlier this year. Both started with the assault of police on a youth, both swelled through organized usage of social media and both have remained unusually safe as regards human life (unless government unleashed use of force).

So what is it that youth wants? What is it that causes the youth all over the world to adopt forceful chaotic measures to get their voices heard? A change from the deliberate status quo and rising class difference being steadily maintained by those in power? Or the need to stop daunting discretions on the though process of the current generation? Is the world really divided along the lines of civilized and uncivilized nations, or is it factually a division of the old and the current streams of thoughtful rebellion?

I am not in the least a supporter of the violent ways a minority from the Muslim community has resorted to for claiming freedom for Palestine, Kashmir and Afghanistan against the West, but the recent incidents of mass murder by a Christian extremist in Oslo and the recent looting and torching of public and private property in UK, clearly indicate that violence is an outcome of pushing a community, a generation, a race or a religion to the wall through forced perceptions that are wholly or partly based on untruth and not a side effect of religious or cultural beliefs.

Certainly, these are times of consideration for the war mongers, the vindictive governments, the biased perceptions and the opinion makers of today. Is counter violence the only way to curb violent tendencies? Is religion, region and ethnicity the only basis of declaration of terrorist inclinations or legitimate protesting? There is a dire need to change policies of creating wider class divide by restricting power and economy in the hands of few of the world’s MNC’s while depriving the rest of the world’s population of their basic human rights of food and shelter.

I was touched by the civility and calm prevailing in UK as huge contrast to what I came back to in Pakistan. Whether the unrest in this part of the world is foreign triggered or not is another conspiracy theory, yet as much as I’m sad to see a peaceful society burning down three consecutive nights in the West, my heart cries day and night to see the once peaceful region that I live in now in tatters and bleeding violence too.

I repeat- Not all Londoners are rioters. Likewise, not all Muslims or Pakistanis are terrorists. The West must stop droning Pakistan.

10 thoughts on “London Riots: What the youth want?”