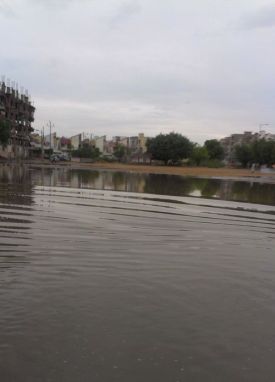 After days of have and have not, it finally rained in Karachi today.

Rain in Karachi comes with power outages and traffic jams.

Years of excavation by MQM, in the name of repairs and upgrades, has done nothing to improve the drainage system. As soon as it rains a few millimeters, roads and alleys turn into deadly pools of sewage and garbage infested water, drowning unsuspected vehicles and humans together.

KESC does its best to put salt on the wounds on Karachiites who somehow reach their homes in one piece, braving through water clogged streets. Power outage starts as soon as a drop of rain falls on the ground.

Today was not different. A typical rainy day in Karachi. It left us with a burning question. Why Karachi suffer when it rains here?

Here is how this recent rain in Karachi is covered at Twitter:

Rain in Karachi follows with traffic jams as roads are clogged with water and panicked citizens who want to reach their homes or safe places as soon as possible. Usually in rain, traffic lights stopped working (those few that work in other days) and traffic cops take shelter, leaving the citizens on their own.

Traffic jam in and around #shershah. Stagnant water making it difficult for small cars to pass thru. #karachi #Raintraffictweet

Remember the time I was working at II Chundrigar Road. Had to walk back home (in Gulshan) on one fine rainy day like this. #Karachi #Rain

Karachi after 30 minutes of rain near shahra-e-faisal. At least drainage is far far better in Lahore twitter.com/omer_xulfikar/…

Not to mention the thugs and street criminals that seeks to turn rain afflicted crisis into an opportunity.

Killings goes on in Karachi, rain or no rain.

Rain Adventures? RT @ammar_haider: RT @norbalm: #Karachi 2 dead when a car they were in was targeted by gunmen at Hasan Square

Power outages and electricity crisis after rain in Karachi.

KESC play its role during and after rains. Electricity vanishes in major part of Karachi, as soon as water drops hit the ground.

This sums up a rainy day in Karachi.