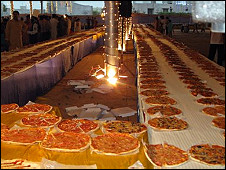 Lahore’s claim to fame isn’t its intricate Mughal architecture solely but its foodies and delicious food too. From phajjay kay paaey to Cholay Bhatoray, Dahi bhalay of Regal Chowk to Laddo pethian, Lahori food has no match. Western food is now also becoming popular day by day with a number of food chains opening in the town making Pizzas and pastas popular too.

A citizen of Lahore is now ready to claim a Guinness world record for the longest line of pizzas. A restaurant owner with 11 years of experience in Italy named Abid Chaudhry has claimed to make 876 meters long line of baked pizzas to break the previous record of 476.7 m.

Abid Chaudhry declare that he had used 3500 Pizzas with 49 flavors and spent around Rs 3500000 for the record breaking attempt. Eighteen people worked for hours and used more than nine hundred pound cheese in their preparations, fifteen hundred pound flour, six hundred kilos of vegetables and tomatoes and seven hundred kg chicken.

This enormous amount of food in 876 meters long line was exhibited Thursday evening in Lahore Metro Super Store. Mr. Abid said that Two thousand people can only eat three hundred meters long pizza, while the rest will be given to charitable institutions.

One has to wait until the Guinness book of world records accepts the effort.

Just for a second thought I was wondering with such a huge amount of Rs 3500000 how many people could eat a single meal?