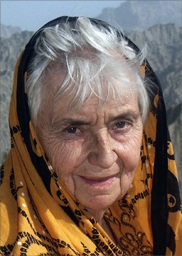 Some people live for others. Three honorable German ladies have been living in Pakistan and working to make the life of others better. People of Pakistan passionately recognize the services of these honorable ladies.

Prof. Dr. Annemarie Schimmel (April 7, 1922 – January 26, 2003) was a well known and very influential German scholar who wrote over 500 books and left deep impression on the people of Pakistan.

Annemarie Schimmel received a doctorate in Islamic languages and civilization from the University of Berlin at the age of nineteen. At twenty-three, she became a professor of Arabic and Islamic studies at the University of Marburg (Germany), where she earned a second doctorate in the history of religions. A turning point in her life came in 1954 when she was appointed Professor of the History of Religion at the University of Ankara (Turkey). There she spent five years teaching in Turkish and immersing herself in the culture and mystical tradition of the country. She was a faculty member at Harvard University from 1967 to 1992 and became Professor Emeritus upon her retirement. She was also an honorary professor at the University of Bonn. She published more than 50 books on Islamic literature, mysticism and culture, and translated Persian, Urdu, Arabic, Sindhi and Turkish poetry and literature into English and German.

For her work on Islam, sufism or mysticism and Allama Muhammad Iqbal, the government of Pakistan honored her with Hilal-e-Imtiaz. She was showered with many other awards from many countries of the world, including the prestigious Peace Prize of the German book trade.

Similarly, Dr. Ruth Katherina Martha Pfau (77 years), commonly known in Pakistan as Leprosy Lady is the founder of the Marie Adelaide Leprosy Centre Karachi and leprosy adviser to federal government. She has spent more than half of her life helping the leprosy patients in Pakistan, a country that is now her own.

“The intensity with which she has worked towards the alleviation of suffering in the northern areas of Pakistan has not changed since the day it began. Subsequently, she moved her efforts to the northern areas of Pakistan, basing herself in Muzaffarabad. Since the Oct 8 earthquake, she has been focusing all her efforts on providing for those still suffering from the disaster,” reads a citation.

The government of Pakistan has conferred Sitari-e-Quaid-i-Azam upon Dr. Ruth Pfau to recognize her selfless work for people in our country.

Annemarie Schimmel had been working in Pakistan in the field of Literature, Dr Ruth Pfau works in Medicine and the third German lady Dr. Senta Maria Anna Siller is working in rural areas of Pakistan to create additional income through self help projects.

Dr. Senta Maria Anna Siller (71 years) studied Graphic Design at the School of Art in Berlin. She did her MA in Archaeology, Philosophy and Education and received a degree of doctorate in History of Arts from the Technical University of Berlin. She served as lecturer and later as Deputy Head of an Art School in Berlin.

Earlier, she earned her first money with silhouettes and illustrations, which along with design became her passion for life. Besides bringing up four children, she continued various activities as a designer (for exhibitions and fairs, children’s cloths, toys and book illustrations) and ran a textile company before she came to Pakistan for the first time in 1965.

After having left civil service and design consultancy, Dr. Senta Siller became honorary manager of self help project in rural Pakistan in 1993 [also in Cameroon (in 1998) and in Colombia (in 1999)]. Main country of her activities is Pakistan from where she is networking with other projects in different countries.

Dr. Senta Siller has organized over five hundred exhibitions, shows and events for income generation for women in rural areas. The focus of her work is “Income generation as a tool of help for self help, poverty alleviation on grass root’s level by ethnic applied arts, the future is in the rural areas and how income generation is necessary there, production of internationally marketable unique and thematic handicraft, eco technology for the independence from central solutions, and the use of communication and information solutions giving chances and opportunities to the people in the rural areas and promotion of rich traditional culture of Pakistan.”

Civil servant appointed for life, Dr. Senta Siller has been conferred different awards like “Floriade” (the Netherlands), “Gestaltetes Spielgut” (Creative Toys-German Toy Industry), “Bundesverdienstkreuz” (highest civil order of merit of the Federal Republic of Germany) to name a few. Pakistan recognizes her relentless and untiring work in the field of income generation for rural women through self help projects.

Making difference in lives of others is a great accomplishment. I am returning back a part of what life has bestowed upon me,” says Dr. Senta Siller.