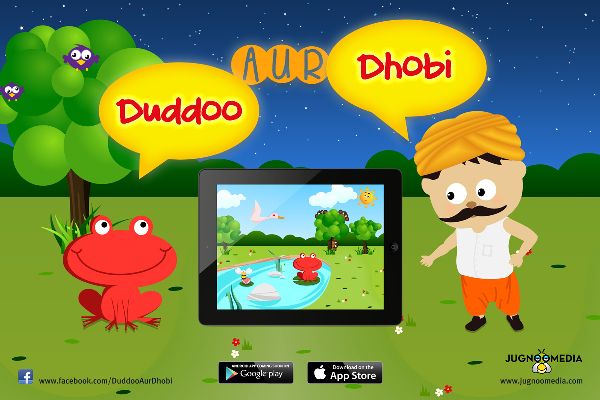 Aimed at providing fun content for Indian, Pakistani and other South Asian children, the app is based on two popular Urdu nursery rhymes “O Baba duddoo’a” and “Dhobi aaya”. It is a ‘digital toy’, which provides a highly interactive and immersive environment for children. The app has lyrics and characters based on South Asian themes, heroes, stories, traditions and context.

Duddoo Aur Dhobi is initially being released on Apple’s iPad and iPhone platform but will also be available on Android platform soon.

Jugnoo means ‘Firefly’ in Urdu, Hindi and other regional languages of South Asia. The venture is named JugnooMedia because the founders were simply enthralled by the vast presence of this small insect while growing up.

In old days, it was the norm for young children to run after these beautiful insects and attempt to catch them. Other children would catch a bunch of jugnoos and put them in glass bottles to make lanterns.

In today’s day and age, this beautiful and fragile insect is under severe threat. As cities become large, paved and cemented with less and less natural habitat, the jugnoo has virtually disappeared from large cities of South Asia. Local culture, heritage and languages are on the defensive; being squeezed by the massive global culture which emphasizes cultural homogeneity at the expense of cultural diversity. It tends to be more material than spiritual and is devoid of local context.

JugnooMedia wants to change that. Its first project is to build immersive digital toys in local languages that are based on popular nursery rhymes of the region.