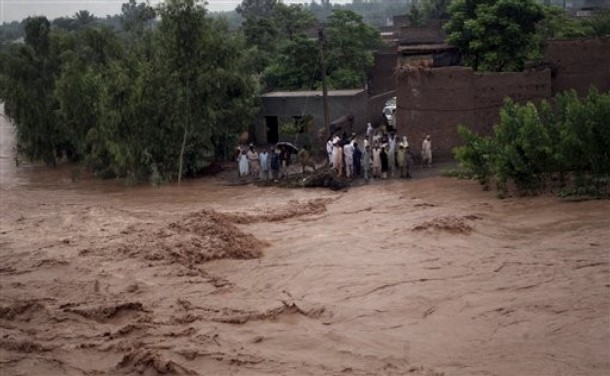 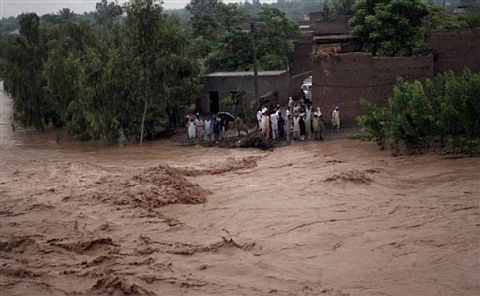 An emergency situation has developed in the country as the second spell of monsoon rains in various parts of Khyber Pakhtunkhwa province in the northwest of Pakistan, results in devastating flood in various rivers. Torrential rains, flash floods, lightning and collapsed houses killed nearly 150 people and left several thousands stranded and uprooted more than 100,000 people in last few days.

According to Mr. Qamar Zaman, Director General Meteorological Department Khyber-Pakhtunkhwa province received between 250 mm and 300 mm of rain in the past 36 hours the highest figure recorded ever in the area in last 35 years and still expected to raise. Dozens of bridges, roads and houses have been washed away.

Footage on Duniya TV showed two elderly men in the Peshawar area, clinging to a fence post as a raging torrent swept over their heads. Dozens of people were still believed missing, so the overall death toll was expected to rise.

According to Reuters, Pakistan government says it will give out 1200 tents, 800 blankets and 2400 plastic mats. Government has deployed teams that can meet food and health needs for the next three months. But rescue and relief efforts are inadequate at this point of time. In Khyber Pakhtunkhwa including Peshawar almost all the cellular networks and to some extent the PTCL landlines are not working.

Khyber-Pakhtunkhwa Information Minister, Mian Iftikhar has appealed the federal and provincial governments to provide support for the people stranded in floods. There is a fear that Water-borne diseases would break out in affected areas. Rains have also caused waterways to swell in northern areas while flooding has been reported in some southern Punjab districts. The water level in the Nullah Lai has increased up to 21 feet alarming level causing fear of flood in Rawalpindi too.

The enduring rain and bad weather are also suspected factors in yesterday’s plane crash in Margalla hills that killed all 152 passengers and crew on board.