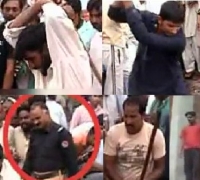 I have no words to express my fury, heartache, angst and torment over another gruesome murder of Hafiz Abdullah. Hafiz Abdullah; resident of Dera Ghazi Khan and father of thirteen children killed a man during a spat. He was caught by police.

As per the rules of law, he should have been tried in a court for murdering a person. However, he was shot by police in police station. Then police handed him over to the family of deceased who stoned him to death. Hold on readers! It’s not the end of the story later on people dragged the dead body and thrashed and battered it with sticks. Finally they BURNT the dead body!

The whole village gathered and markets of the vicinity were shut to witness the scene rather taking for pleasure in this atrocious and frightful act. Police maintaining its previous records served as silent spectator.

According to GEO news DSP Chandia, who supervised this horrific activity, is still working.

We will now lament on this horrendous incident, some will even shed tears and yet some will consider it as another grisly murder. Everyone would take this event in a different way even then many similar questions would arise in our minds.

As a Muslim and Pakistani society where are we heading towards? Even if he was a criminal still then who allowed police and people to slay a person without being tried in the court? What has allowed a sick mob to take law in their hands? What has made our society act this way? Almost two years back a mob burnt dacoits in Karachi then another fanatic mob killed two brothers in Sialkot because they thought the brothers were dacoits and now an uncompromising mob has stoned a person to death; WHY? Why masses have become so insensitive? And yes when we would Pakistani police stop acting as hushed bystander in such cases?