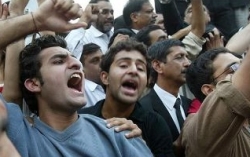 Our politics is considered as a game for hooligans. Politicians, whether in assembly or not, are in a habit of character assassination of other politicians. Without holding themselves accountable they demand accountability for other politicians and ministers. Ironic! Isn’t it?

Pakistan celebrated her 63rd independence day on 14th august 2010; almost for 35 years Pakistan has been ruled by five obstinate military rulers. These adamant dictators ruined the political and democratic infrastructure of Pakistan thus weakening the roots of autonomous institutions.

“I see chaos, and as the chaos lengthens and intensifies, I see two possibilities,” said Rasul Bakhsh Rais, professor of political science at Lahore University of Management Sciences. “One is the military directly takes over, the other is it carries out some form of intervention and tells the leaders to mend their fences or else.” This statement clearly indicates that how easily critics suggest military coup a solution to pseudo or false democracy.

Though every government in Pakistan has remained indulged in corruption yet the current government has a superfluous reputation of electing a president who is known as Mr. 10% in national and international community. On the global corruption index brought out by Transparency International in 2009 Pakistan went up to 34th place. Shameful! Isn’t it?

Political crisis in Pakistan is also marked by horse trading and floor crossing. Politicians to get hold of ministries change their loyalties before and after elections. These political immoralities are cancer to our political system. Some corrupt politicians are famous in Pakistani political arena as “LOTAS” as they always change their parties for some good posts and benefits.

Critics often disparage political set up of Pakistan by labeling the government as incompetent and illustrious for bad governance. With every passing day the political crisis in country is deepening. It is rather crystal clear that politics in Pakistan is now divided into two distinct groups i.e. pro judicial group and the other is pro government group. At the moment this split is leading towards clash of democratic institutions escalation of political crisis.

The question is what as an individual and as a nation we can do to save Pakistan from intensifying political crisis? What should be our strategy to strengthen democracy? The simple answer to these questions is this that if we want to save Pakistan we have to change ourselves rather expecting our politicians and leadership to change because “We can not teach old dog new techniques”. They will remain as they are!

We have to create awareness among masses to come out of this hierarchical vote casting mind set. People should realize that if Benazir Bhutto has died; casting a vote in favor of PPP; would not bring her back. Vote casting is a righteous responsibility and one must cast his vote honestly.

Every one of us should go for self reliability rather pointing fingers towards others. This would help us to change our own approach and stance towards various political issues.

Informing people about significance of matter of national interest like notifying them about importance and need of big and small dams. Another important thing is this that we should not believe in what media presents and projects because Pakistani media is famed world wide for creating political hype and frustration. Especially private print and electronic media is notorious for sabotaging political circumstances. In such cases we should not follow media reports blindly.

In a nut shell if we want to see an optimistic modification in Pakistani politics; every individual has to play his role; rather expecting leadership to change.