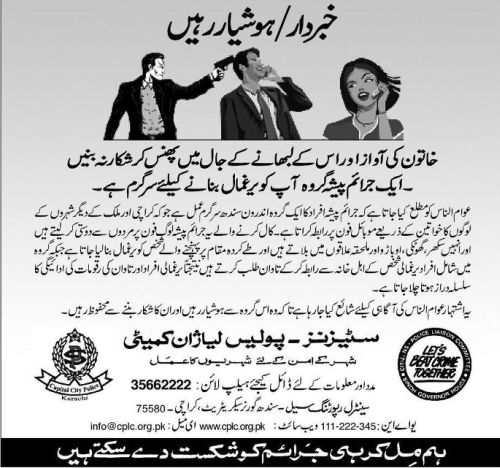 CPLC, The Citizen Police Liaison Committee, has launched a public service ad to increase awareness about recent wave of kidnapping for ransom in Karachi and elsewhere in Pakistan.

According to the CPLC, the modus operandi of such kidnappers is that they approach their targets through attractive women. The friendly female voice on phone helps in softening up the victims and ultimately trapping them by inviting them to some distant location. This follows with ransom negotiations with the immediate family. Usually the victims are released after paying up the ransom, but sometimes things turn nasty and kidnappers decide to get rid of the kidnapped. A double whammy for the family and friends.

It is not easy to point to the real culprits for this heinous crime. While it is true that the perpetrators are a bunch of evil minded people, seeking means to get rich quick – there are political and social aspects to it as well. Media is to blame for psychological damage by its show of provocative content and the telecommunications companies pitch in their share by offering low call rates, almost free SMS services, tempting consumers into engaging in immoral activities over phone. The craze for acquiring phone number of girls is a fad in our youth of today.

In this society, where even the beggars use cell phones, lack of education and religious knowledge with rapidly deteriorating social values can lead to much severe consequences.