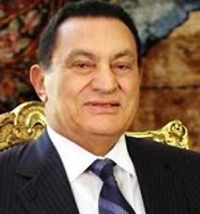 After 30 years of power, Hosni Mubarak stepped down as President of Egypt.

He was appointed vice president in 1975, and assumed the Presidency on October 14, 1981, following the assassination of President Anwar El Sadat. He is the longest-serving Egyptian ruler since Muhammad Ali Pasha. Before he entered politics Mubarak was a career officer in the Egyptian Air Force, serving as its commander from 1972 to 1975.

He resigned from the office of President on the 18th day of nation wide protests that started on January 25, 2011. Protesters called for his resignation as president of Egypt.

Today, Vice President Omar Suleiman announced that Mubarak had resigned as President of Egypt, transferring authority to the Higher Council of the Armed Forces.

The Swiss government on Friday froze any assets belonging to former Egyptian President Hosni Mubarak or his family in Switzerland. At the end of 2009, Egyptian deposits in Swiss bank accounts totaled 3.6 billion Swiss francs (about $3.5 billion), according to the Swiss National Bank.

1 thought on “After 30 years in power, Hosni Mubarak stepped down as President of Egypt”