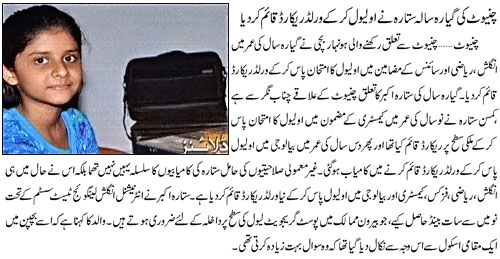 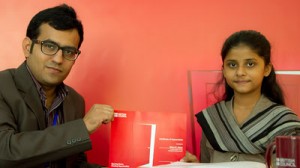 Sitara Brooj Akbar is the eldest of her five siblings. At a young age, she developed a habit of questioning everything taking nothing for granted, according to her father Brooj Akbar.

When traditional school-based learning became impossible, her father “had to open a private school (Star Academy, Rabwah) for her because no other school was willing to keep her,” Akbar stated. She left traditional schools by the third grade when her teachers began to feel irritated and uneasy.

She recently took the IELTS (International English Language Testing System) test where she scored a 7 band out of 9. The score is required by most international universities and colleges for admission in postgraduate degree programmes.

The only reason she took the test to begin with was to get an informed idea of where she stood at the international level concerning English. Sitara speaks English with the confidence of an adult, giving speeches in front of large audiences at the tender age of five. Asked about the causes behind her academic excellent, the 11-year old replied simply: “You have to teach your children at a young age; that is the age for learning. If you do not teach them at that age, then it is all useless.”

But Sitara’s ambitions have only just begun: she hopes to become a scientist and chemistry in particular has captivated her. “Chemistry is an entirely different world altogether,” she said while maintaining her love and interest in physics and other sciences at all. Her idols include Dr Abdus Salam, the country’s sole Nobel laureate in Physics who she hopes to emulate in the not so distant future.

Her younger sister, Mahpara Komal, 10, was also refused by both Punjab University and Aga Khan University to appear in their entrance examinations, since she was four years short of the minimum age.
“Now she too is preparing for O-levels,” Sitara said. “She copies me.”